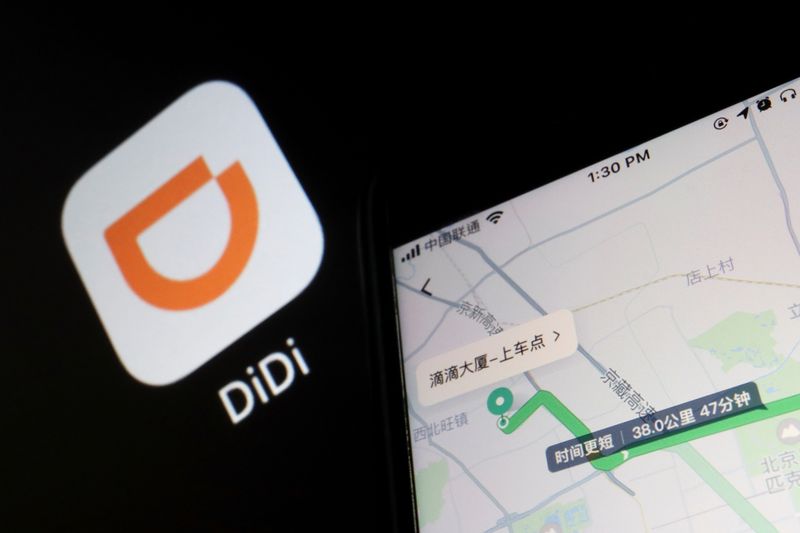 © Reuters. FILE PHOTO: A navigation map on the app of Chinese ride-hailing giant Didi is seen on a mobile phone in front of the app logo displayed in this illustration picture taken July 1, 2021. REUTERS/Florence Lo/Illustration

By Scott Murdoch and Yilei Sun

HONG KONG/BEIJING (Reuters) -China’s ride hailing giant Didi Global Inc stores all China user and roads data at servers in the country and it is “absolutely not possible” that the company passed data to the United States, a senior company executive said on Saturday.

China’s cyberspace agency announced on Friday it had launched an investigation into Didi to protect national security and the public interest, just two days after the company began trading on the New York Stock Exchange.

News of the Cyberspace Administration of China () probe, and the agency’s decision to block Didi from registering new users during its investigation, knocked 5% off Beijing-based Didi’s shares on Friday.

“Like many overseas-listed Chinese companies, Didi stores all domestic user data at servers in China, it is absolutely not possible to pass data to the United States,” Li said in a post on Weibo.

Didi, which offers services in China and more than 15 international markets, gathers vast amounts of real-time mobility data every day. It uses some of the data for autonomous driving technologies and traffic analysis.

Founded by Will Cheng in 2012, the company has already faced regulatory probes in China over safety and its operations licence.

“I’m not sure what the final implications might be but regulatory crackdown has been an ongoing concern even before the listing, with Didi already having been called in by the regulators twice,” said Sumeet Singh, Aequitas Research director who publishes on Smartkarma, told Reuters on Saturday, before Li’s post.

“This time stopping the company from taking in new users shouldn’t hurt a whole lot since the company already has 80% plus market share to begin with, as long as its not extended for a period of time.”

The cyberspace agency did not give any indication of how the long the investigation would last or provide any other details.

Didi said on Friday it planned to conduct a comprehensive examination of cybersecurity risks and would cooperate fully with the relevant government authority. It also said apart from the suspension of new user registrations in China, it was operating normally.