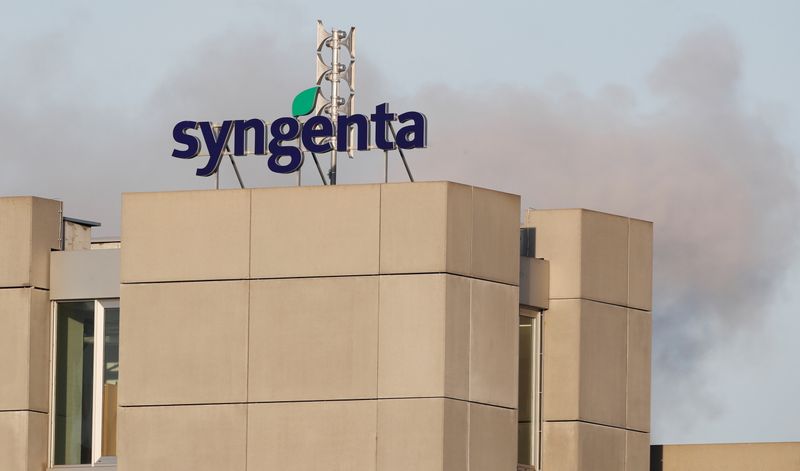 WEI COUNTY, China (Reuters) – Agrichemicals giant Syngenta Group is rapidly expanding its rollout of farm services in China ahead of a huge stock market listing, as it seeks to meet surging demand from farmers crucial to Beijing’s increasing focus on food security.

The world’s biggest crop-protection maker and No. 3 seed supplier says it is boosting grain yields and raising farmers’ incomes just as the pandemic fuels government worries about food supplies and pushes up the cost of key farm materials.

That means opportunity for Swiss-based, Chinese-backed Syngenta to grab market share in a fragmented farm chemicals market, positioning the company for growth as Chinese farmers expand their holdings.

The group aims to raise $10 billion by listing in Shanghai in what is likely to be the year’s biggest market flotation.

But Syngenta acknowledges it “faces tremendous competition in the markets in which it operates.” Rivals include Bayer AG (DE:) and Corteva (NYSE:) Inc, as well Chinese firms selling agronomy services to the nation’s farmers.

“Before, we sold pesticides, seeds and fertiliser. Now we’re a farm services company – we sell service and technology,” said Mao Feng, chief brand manager for Syngenta Group China’s Modern Agriculture Platform (MAP) and digital agriculture. MAP is to receive some 12% of the IPO proceeds for expansion, according to a prospectus filed on Friday.

“Selling individual products, we had hit the ceiling, there was no more room,” Mao told reporters last month.

In China, crop yields lag far behind Western countries, even as growers use three times as much fertiliser, while farms in the vast country are tiny by global standards, averaging half a hectare, compared with 180 hectares (440 acres) in the United States.

So Syngenta is trying to help itself by helping farmers like Liu Ligang.

Liu, who farms 20 hectares (50 acres) in Wei county in the northern province of Hebei, has doubled his contracted land over the past four years, one of a growing number of Chinese farmers seeking to become professional growers. To date, 37 million hectares have been contracted out, some 30% of China’s arable land.

Liu has just harvested some 7,500 kg of wheat per hectare (6,600 pounds per acre), up 25% from last year and 10% above his neighbours, he says, thanks to Syngenta’s MAP service, which helped him manage pests.

“Before, it was only when the disease came that the pesticide was started,” he said. “That is too late, and it can be advanced now.”

In addition to supplying seeds and chemicals, MAP runs training centres across China and about 900 demonstration farms showing growers what produces the best yields in a given location. Farmers get free management of their land, and in return buy the firm’s products or others recommended by its agronomists.

MAP tripled its revenues to more than $280 million in the first quarter from a year earlier, adding 40 centres to reach 365 nationwide. It contributed 4% of group revenues, up from 1% in the same period a year earlier.

The business also makes money selling crops and fresh produce to such customers as Alibaba (NYSE:) Group’s Hema supermarkets and Dole Food Co. They pay above-market prices for MAP farmers’ quality and the traceability of its digital platform.

Revenues are expected to break $1 billion this year and hit some $4.5 billion by 2025, according to one industry estimate.

But other companies are also trying to capitalise on the increasing scale and sophistication of Chinese farming. Bayer (OTC:), for example, is advertising for a China head of “digital agriculture”.

Beijing-based ICAN has built digital crop models to guide farmers through plot selection, planning and harvesting. It claims its modelling can increase yields while reducing fertiliser use.

Sales of fertiliser and crop chemicals in China were $24 billion in 2018, Rabobank estimates, more than the $20 billion in the United States, while seed in each country was worth around $12 billion.

Input markets are more fragmented in China, offering huge room for share growth. Syngenta generated less than 5% of its sales in China before it was acquired by state-run ChemChina in 2017. It had less than 1% of the seed market, though a more significant 7% share of crop chemicals.

But China’s small farm sizes push up logistics costs, and progress in consolidating land has been slower than expected, said Thomas Luedi, senior partner at Bain & Co in Shanghai.

“We found that to break even we needed to have 5,000 hectares of farmland in one town using our service,” said an industry executive who previously helmed a farm services firm.

Syngenta said scattered farming and incomplete infrastructure and supply chains hold back all services firms. But it is working with farm co-operatives and trying to standardise production across entire villages to reduce the impact of fragmented landholdings.