On Tuesday, the US Defense Department scuppered its JEDI cloud computing project, a $10 billion, Trump-administration agreement with Microsoft (NASDAQ:). Instead, the DoD , “a new contract expected to include its rival Amazon.com and possibly other cloud players.”

Shares of Amazon (NASDAQ:) surged on the news. The e-tail giant’s stock closed $164 higher, gaining 4.7%. Microsoft dropped as much as 1.2% on the news, but finished flat.

The original contract has been on hold since Amazon filed a lawsuit essentially claiming the award was a political move by then-President Donald Trump who exerted improper pressure on the military to steer the contract away from Amazon. The former president famously mocked the Seattle-based company and publicly skewered its CEO, Jeff Bezos repeatedly.

Along with providing added momentum to shares of Amazon, according to Bloomberg, yesterday’s rally “raised Bezos’s fortune by $8.4 billion,” making him the richest man in the world, now worth a record $211 billion. Nice ‘revenge’ for a man who had to endure years of Trump’s derision.

As well, shares of AMZN hit a new record, for the first time since September, breaking out of a range it had been trapped in since then. Is the stock now setting up to hit even higher heights, potentially taking Bezos’s level of wealth into the stratosphere? 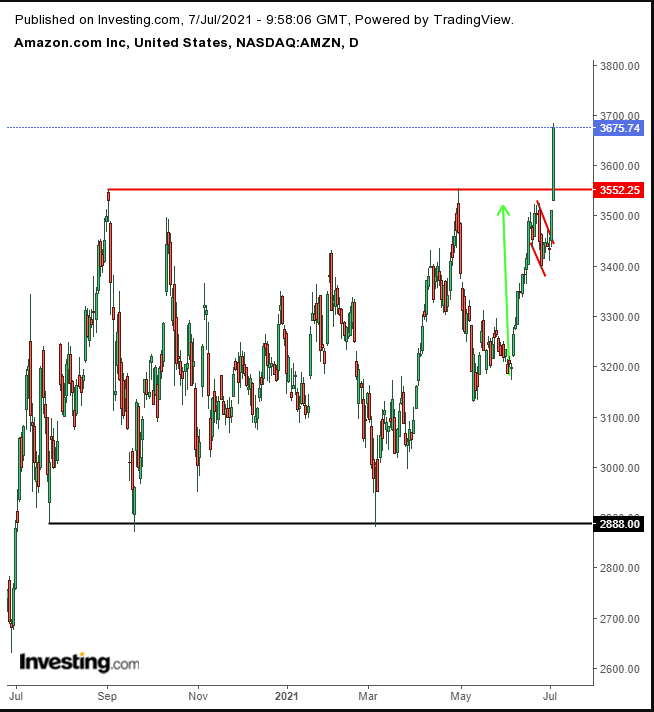 Yesterday, the stock price blew past the top of the range in which it was trapped, partially fueled by a market spring-mechanism—the falling flag. Notice the sharp advance that preceded the flag, driven by inflation fears and a resurgence of the Delta variant around the world that put the pandemic market-darlings back in play.

That 11% jump prompted profit-taking, creating the dip. Howevere, heavy interest in the stock kept it tight, till the upside breakout signaled a resumption of the underlying uptrend, with a minimum of the same $350 move that created the flagpole, repeating from the point of breakout.

On top of that target, a range that is broken is expected to repeat the same height above the range as it had below its top. Finally, the longer the range the more impetus it would have, given the substantial investor interest in the stock that was moving the price amid the pattern.

Conservative traders should wait for a return move to retest the top of the range, if not the flag, before considering a long position.

Moderate traders would wait for the same dip, for the reduced exposure if not for confirmation of the renewed uptrend.

Aggressive traders could enter at will, provided they act according to a plan that justifies the risk. Here’s an example.