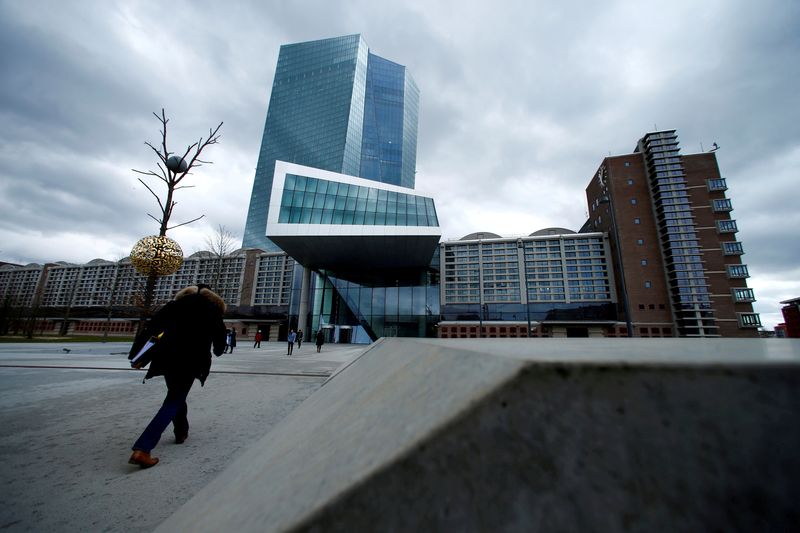 FRANKFURT (Reuters) – The European Central Bank unveiled plans on Thursday to take greater account of climate change in its key monetary policy decisions, the latest in a series of steps by the world’s biggest central banks to acknowledge their role on the issue.

Detailing the results of a long-awaited strategic review, it said climate change would be a factor in ECB policy related to the disclosure of financial information, risk assessment, collateral and its corporate sector asset purchases.

“Looking ahead, the ECB will adjust the framework guiding the allocation of corporate bond purchases to incorporate climate change criteria, in line with its mandate,” said the interest rate-setting authority for the 19-member euro area.

“These will include the alignment of issuers with, at a minimum, EU legislation implementing the Paris agreement through climate change-related metrics or commitments of the issuers to such goals,” it added in a statement.

The move makes the ECB one of the more forward-leaning monetary authorities on climate change. The U.S. Federal Reserve has acknowledged that it does have economic consequences but says it does not factor it into monetary policy decisions.

ECB President Christine Lagarde, who has spoken passionately about the need for climate action and has shared platforms with campaigners such as David Attenborough, has made it a priority of her first two years at the helm to establish the bank’s role in the field.

While the ECB said governments and parliaments had “primary responsibility” to act on climate change, it recognised the need to do more within its own mandate due to the potentially huge financial implications both of disruption from extreme weather events and global efforts to cut carbon emissions.

– development of new indicators, covering green financial instruments and the carbon footprint of financial institutions, as well as their exposures to climate-related risks

– a detailed plan from next year to require climate change-related disclosures for eligibility as collateral and asset purchases.

– climate stress tests in 2022 of the balance sheet of the Eurosystem, which comprises the ECB itself and the national central banks of the 19-member euro area.

Central banks differ on how deeply they should be involved in broader climate change policy.

While Japan’s central bank remains reticent about buying green bonds, it has announced it will provide funds to financial institutions that boost loans and investment for activities aimed at combating climate change.

The People’s Bank of China has said it increased the share of green bonds in its foreign exchange reserve investments while controlling investments in high-pollution assets. Its green bond rules ban funding for coal-related projects.

Bank of England chief Andrew Bailey said his bank was exploring ways to green its monetary policy portfolio after a disclosure report last year showed the carbon footprint of its asset holdings were consistent with a rise of as much as 3.5-4 degrees by 2100.

With Republican lawmakers breathing down its neck, the U.S. Fed is among the most reticent. While it has begun conducting more research on the economic implications of climate change, Fed chair Jerome Powell insists it is a matter for government and not something that relates to monetary policy.

Indonesia’s Bukalapak kicks off $1.1 billion IPO, biggest in over a...