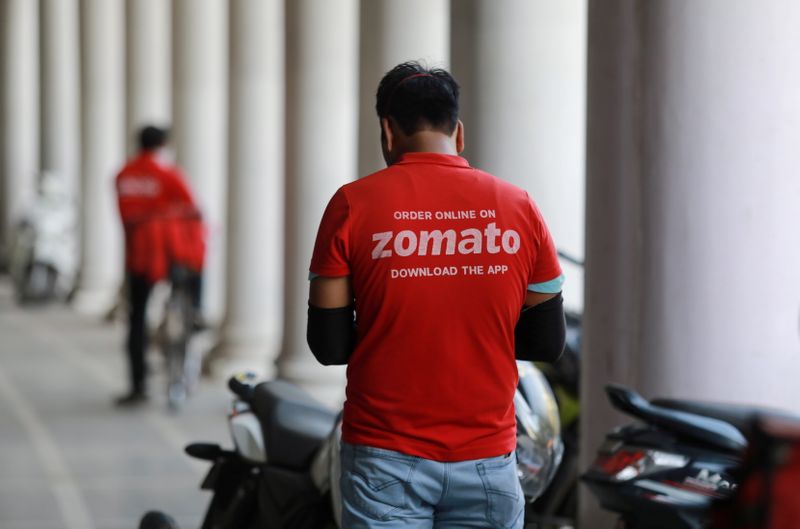 © Reuters. FILE PHOTO: A delivery worker of Zomato, an Indian food-delivery startup, waits to collect an order from a restaurant in New Delhi, India, May 21, 2020. REUTERS/Anushree Fadnavis/File Photo

BENGALURU (Reuters) – Indian food delivery firm Zomato said on Thursday it would price its 93.75 billion rupees ($1.25 billion) initial public offering (IPO) at 72 to 76 rupees per share, with the IPO set to open for subscription from July 14 to 16.

The company, backed by China’s Ant Group and one of India’s most prominent startups, filed for its IPO in late April to cash in on a pandemic-led surge in online ordering.

Being the first food delivery company to pursue a public listing in India, the IPO will be closely watched by investors and is expected to see strong demand.

The chief of Oyo Hotels, another well-known Indian startup, said on Wednesday upcoming IPOs would be looked at very closely as the SoftBank-backed hospitality company was also considering going public.

For IPOs in India, 2021 has been a strong year with 22 companies debuting so far. A flush of money from foreign funds and mom-and-pop investors putting their money saved during the lockdown to work have driven the surge.

The company was launched in 2008 and competes with rivals such as Accel-backed Swiggy and Amazon (NASDAQ:).

Zomato and Swiggy dominate the Indian food delivery market, which research firm RedSeer estimates is worth $4.2 billion, while Amazon remains a relatively new and smaller player.

Zomato is scheduled to hold a virtual press briefing at 0630 GMT on its IPO.

Morgan Stanley (NYSE:), Credit Suisse (SIX:) and Citigroup (NYSE:) are among the lead book-running managers for the IPO.