Facebook (NASDAQ:) shares surged on Friday, gaining more than 5% for the day. There were two reasons for that dynamic move.

First, Credit Suisse raised its price target on the social media company’s shares from $400 to $480, a 20% bump, after “conversations with advertisers continue to suggest ad budget recovery across most sectors, which will help Facebook,” according to the bank via TheStreet.com.

A second, though less obvious explanation was Snap’s (NYSE:) stellar Q2 on Thursday, which beat on earnings, revenue and user growth. Markets treated the smaller, internet content and information company’s success as a leading indicator for signs of growth in online advertising which is of course SNAP’s core business but also key for the entire social media space—including the segment’s behemoth, Facebook. 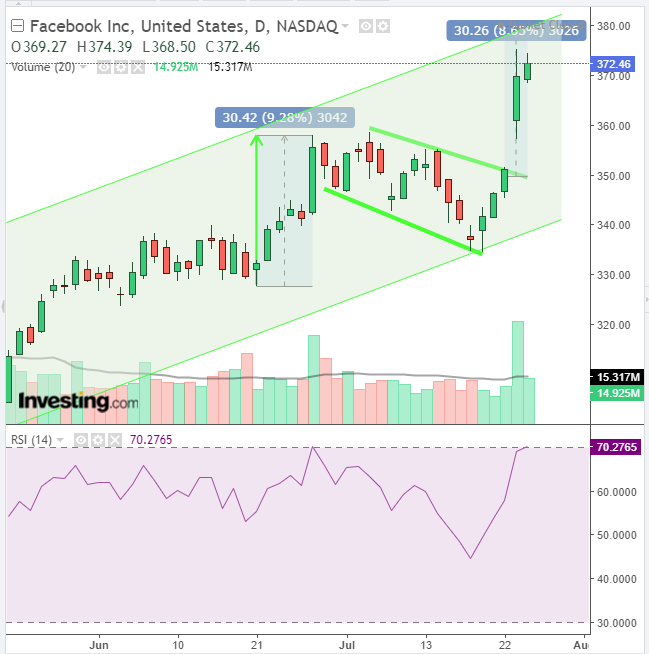 On Friday, Facebook completed a falling flag, bullish after its more than $30 move higher, an over 9% surge in just six sessions. At that point, profit-taking led to a pause.

Despite the declining nature of the range, the fact that it’s so crowded—in contrast to the near-straight up rising line previously—suggests sufficient demand to absorb the supply, which is seen to be just temporary.

The upside breakout is the “proof of the pudding.” Bulls were stronger than bears, and after they took everything sellers had to give and more, bids were raised to find fresh supply.

This behavior tends to put the price into a market chain reaction—including via short covering and triggered longs. As well, it’s expected to propel the stock higher still.

Note: the price gained as much as $25 from the point of breakout, already most of the $30 target, measured by the flagpole, the sharp upward move ahead of the flag. Friday’s breakout was powerful, supported by surging volume.

On Monday, however, the price failed to best the previous session, closing below its intraday high. Even Monday’s session high was below that of Friday. The volume too, fell by about half, just slightly higher than where it had been on Thursday.

The price appears to be finding resistance at the top of its rising channel, where sellers overcome buyers.

As well, the RSI crossed the 70 overbought level, demonstrating momentum may be heating up and could possibly ready for a downward correction. Therefore, cautious investors might want to wait for a dip before going long.

On the other hand, if earnings will prove to be as good as expected, there will be no dip at these levels. Then again, and we can’t stress this enough, perhaps Friday’s surge already priced in the higher earnings expectations investors saw signaled in Snap’s beat.

Conservative traders would probably wait for the earnings release on Wednesday, after the close, followed by a dip.

Moderate traders could enter a long position, accepting the possibility of potential whipsaws, after the flag actualized most of its implied target.

Aggressive traders might enter a contrarian short position, counting on a pullback. However, this is risky, and a tight stop-loss is required. Here’s an example: