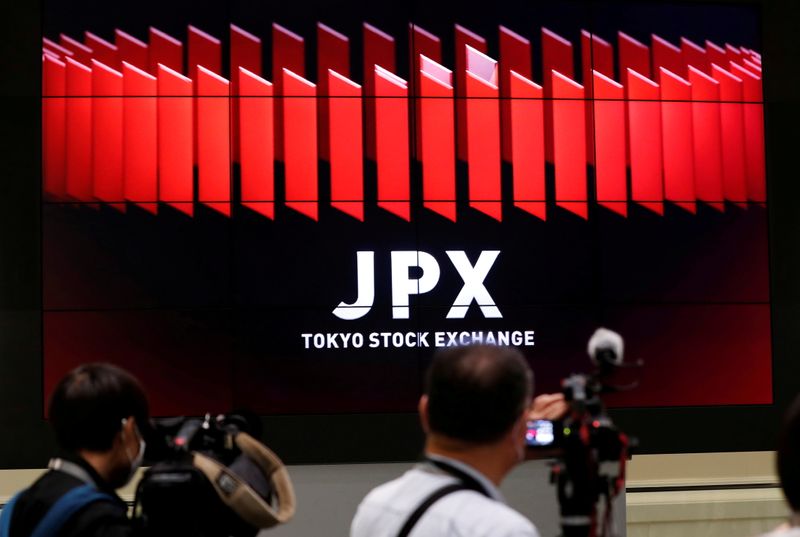 HONG KONG (Reuters) – Asian shares stayed stuck at seven-month lows on Wednesday, as markets continued to digest a storm in Chinese equity markets, while currency markets were quiet with traders wary of placing large bets prior to the outcome of a Federal Reserve meeting.

MSCI’s broadest index of Asia-Pacific shares outside Japan dropped 0.31% in morning trading. Markets in Hong Kong and mainland China stabilised after a sharp sell-off in the previous session, balancing declines elsewhere in Asia.

Asian shares have fallen in each of the three previous sessions as regulatory crackdowns in China roiled stocks in the technology, property and education sectors, leaving international investors bruised.

Chinese state-run financial media urged calm first thing on Wednesday morning, and while Chinese shares swung back and forth in early trading, they did not repeat the sharp plunges seen earlier in the week.

Chinese blue chips were last flat, having had a volatile start to the day, and the Hong Kong benchmark gave up early gains to fall 0.24%. Both were still near eight-month lows.

The embattled Tech Index was last flat, also after a volatile morning, a day after touching its lowest level since the index’s creation in July 2020. It is still down about 40% from its February high.

slid 1.15% to a six-month low, with shares in SoftBank Group, a major investor in Chinese tech, falling 3.68%.

“We are still trying to digest the news from China, what’s going to be new is how the Fed view the latest round of (COVID-19) infections and whether they need to readjust their view,” he said.

The statement from the Fed policy meeting, and a press conference from chairman Jerome Powell are due at 2 p.m. EDT (1800 GMT).

Markets will be watching closely for any hints on when the Fed will start reducing its purchases of government bonds and any fresh insight into its views on inflation and economic growth.

The declines in Asian equities on Tuesday spread to other markets overnight, causing Wall Street to retreat a little from the record highs set earlier in the week.

After the U.S. close, Google parent Alphabet (NASDAQ:) Inc, Microsoft (NASDAQ:), and Apple (NASDAQ:) all reported record quarterly earnings, though the smartphone maker’s shares slid in after-hours trading on the back of a slower growth forecast.

In currency markets, the U.S. dollar sat below recent highs after a month-long rally, the safe-haven yen gained and the risk-sensitive Australian and New Zealand dollars dropped back.

Analysts at CBA attributed the moves to falling risk sentiment on the back of the Chinese regulatory crackdown.

Oil prices rose as industry data showed and product inventories fell more sharply than expected last week, outweighing worries about the consequences of surging COVID-19 cases. U.S. crude ticked up 0.73% to $72.17 a barrel and rose 0.54% to $74.93 per barrel.