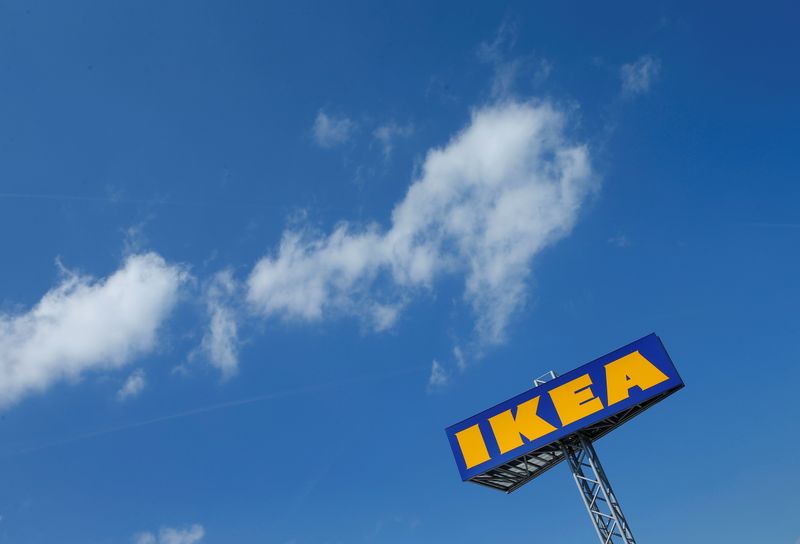 © Reuters. FILE PHOTO: The logo of IKEA is seen above a store in Voesendorf, Austria, April 24, 2017. REUTERS/Heinz-Peter Bader

Ingka Group, the owner of most IKEA stores worldwide, said households would be able to buy affordable renewable electricity from solar and wind parks, and track their usage through an app.

Ingka’s partner Svea Solar, which produces solar panels for IKEA, will buy the electricity on the Nordic power exchange Nord Pool (NASDAQ:) and resell it without surcharge. Households will pay a fixed monthly fee plus a variable rate.

IKEA, which also sells solar panels for households in 11 markets, said those buyers would be able to track their own production in the app and sell back surplus electricity.

Jonas Carlehed, head of sustainability at IKEA Sweden, told Reuters he hoped to roll out the new renewable energy offer as well as IKEA’s solar panel offering to all markets.

“We want to make electricity from sustainable sources more accessible and affordable for all,” the company said in a statement.

“IKEA wants to build the biggest renewable energy movement together with co-workers, customers and partners around the world, to help tackle climate change together.”

Ingka said the plan was to offer electricity from solar and wind parks five years old or less, as a way to encourage the building of more parks.

More broadly IKEA aims to be “climate positive” – reducing greenhouse gas emissions by more than is eitted by the entire IKEA value chain, from raw material production to customers’ disposal of their furniture – by 2030.

Carlehed said in an interview he saw the renewable energy offer to customers as contributing to reaching that target as well as being a potential new revenue stream.

“It will contribute indirectly (to the target). The link is that our customers’ use of our products account for around 20% of IKEA’s total climate footprint – from appliances, lighting and electronics such as speakers and so on.”