We’re on track for a losing week, though stocks continue to show resilience.

Thursday was the most recent example. Yesterday’s rally after a steep early drop was really impressive as the “buy the dip” mentality lives on. There’s no way else to explain it. It’s the same trend seen most of the year, and this time it came despite worries about Fed policy, the Delta variant and a slowdown in China.

That’s not to say it’s going to necessarily keep happening. Only that so far, bets against this market haven’t paid off, for the most part.

Stellar Earnings Parade Continues Even As Season Winds Down

One reason for the resilience in face of so many challenges is a healthy earnings background. In the long run, the market runs on earnings, and we’re wrapping up one of the best earnings seasons in history.

For a coda, Foot Locker (NYSE:) shares were up almost 9% in pre-market trading today after the company reported what Barron’s called “out of this world” earnings. The footwear company more than doubled Wall Street analysts’ expectations for the bottom line, and posted a nearly 7% rise in comparable store sales.

Also this morning, Deere (NYSE:) is on the rise. The company beat analysts’ top- and bottom-line estimates and raised guidance. DE is an important barometer of the global economy because it has its hands in several key industries including agriculture, forestry and construction. That’s why it’s good to hear DE pointing to “favorable fundamentals” when there’s so much hand-wringing about economic growth.

Another thing that’s gotten some hand-wringing is inflation, but with down near $62 a barrel from highs of $76 earlier this year, one aspect of price pressure seems to be receding.

Having said that, we’re far from out of the woods. Stock indices were lower this morning and volatility is up nearly to yesterday’s highs. Today’s an options expiration day, too, which may fuel some of the volatility. Trading could lack conviction the next few days ahead of the Fed’s Jackson Hole symposium because no one knows what the Fed is going to do.

Stretched But Not Broken

If it sometimes feels like the stock market is playing with a net, maybe that’s because of days like Thursday.

Once again, an ugly overnight session and early losses mellowed out pretty nicely across the course of the day, allowing the to finish with very slight gains. The “net,” so to speak, appears to be that same 50-day moving average that’s been there on every decline over the last six months.

Right now, the 50-day moving average sits just below 4350 for the SPX. The index approached within 10 points of that at its lows yesterday but couldn’t find more selling interest. Instead, buyers seemed to come back in, just as they have each time the index tested that technical level on mid-month selloffs in July, June and May.

Don’t let that make you complacent, however. The market hasn’t had a formal correction (defined as a drop of 10% or more) since last year when the pandemic first surged. History suggests that corrections are pretty typical, and we’ve had a bunch over the last five years. That means some might say we’re overdue, though it’s not written in stone that corrections have to happen.

Also, having a few “mega-cap” stocks perform well yesterday helped mask the fact that declining issues far outpaced gainers on both the SPX and Nasdaq. Don’t forget how the weighting of those behemoths on their indices can sometimes make you believe the market is performing better than it actually is.

On the other hand, there’s a lot of things working against any real pullbacks. First of all, you have Treasury yields down below 1.3%, meaning the Treasury market arguably doesn’t offer much competition right now to stocks for those trying to grow their money. The stood near 1.23% this morning, down 15 basis points from recent highs.

When you consider current inflation levels, buying fixed income at these yields means you’re looking at potentially negative returns. That’s why we’re still hearing analysts talk about the TINA (there is no alternative) scenario helping the stock market.

Also, there appears to be plenty of cash on the sidelines, analysts say, which potentially could be dropped into the market on any major retreats. We’ve seen that again and again since the pandemic began. And just because the Delta variant is picking up doesn’t necessarily mean people won’t keep doing what’s been working for them on the investment front.

The crushing blow of Delta, now causing around 140,000 new U.S. cases a day, actually could be seen as a somewhat positive development for stocks, while that’s not to discount the obvious unfortunate human toll. Any sign of Delta curbing the Fed’s urge to tighten the money supply would likely underpin the stock market.

Next week features a speech by Fed Chairman Jerome Powell in Jackson Hole at the central bank’s annual Wyoming symposium. Minutes from the Fed’s last meeting suggest that Jackson Hole could be when Powell provides more insight on how soon the Fed plans to begin tapering its $120-billion-a-month stimulus, a potentially bearish event that may have hurt the market Wednesday. However, the current caseloads, accompanied by new restrictions in some jurisdictions, may make Powell and the Fed more hesitant on taper timing.

Right now, it seems possible that Powell might give some sort of announcement on when the Fed could begin cutting its bond purchases. Many analysts expect tapering to begin by the end of the year. But the start of tapering is only one aspect. Another is how quickly the Fed plans to pull back. Will it take place slowly over many months? Quite possibly. Will Powell provide any real granular details on the process next week? Seems doubtful. It’s more likely he’ll deliver an overview and we’ll learn more slowly over time at the next few Fed meetings.

Despite all this, the Delta variant appeared to call a lot of the shots on Wall Street yesterday. It was like deja vu all over again, to quote baseball great Yogi Berra, as “reopening” parts of the market like airlines and casinos took a whipping and the FAANGs got a lift. That was how things generally behaved 18 months ago when COVID first hit and “stay at home” stocks led the way. “Defensive” sectors like Staples and Utilities also outperformed the broader market.

Three of the five FAANGs plus Microsoft (NASDAQ:) and Nvidia (NASDAQ:) recorded gains Thursday. Netflix (NASDAQ:) saw the biggest jump of any FAANG, rising more than 4%. Does that mean investors think we’ll be stuck at home watching “Ozark” and “Better Call Saul” once the new seasons begin? Perhaps.

A lot of the same factors we’ve been watching all week continued on Thursday amid a “risk-off” type of move. The U.S. dollar—sometimes thought of as a haven during times of crisis—reached its highest level since way back last November at above 93.5. Strength in the dollar keeps weighing on commodities like crude and , which are priced in dollars and become more expensive for holders of other currencies in a strong-dollar environment.

Of course, commodities have fundamental problems of their own right now, mainly from China. A bunch of economic data from that country have disappointed lately, and the Beijing government is causing some self-inflicted wounds with clampdowns on internet companies to stop what it says has been unfair competitive practices. Alibaba (NYSE:) fell nearly 7% yesterday, and Tencent (TCEHY (OTC:)) also got hammered. 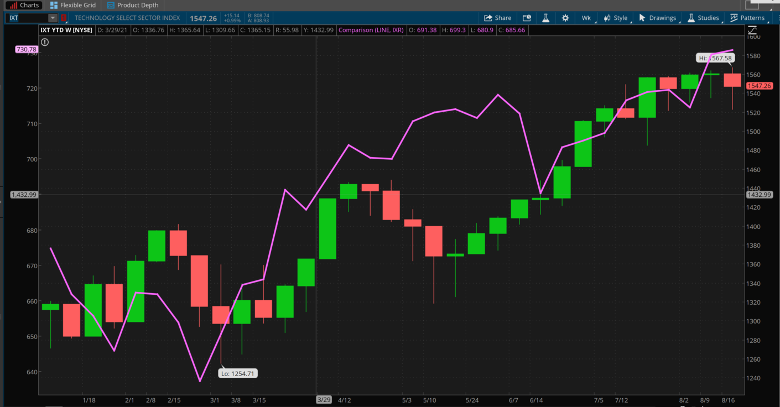 CHART OF THE DAY: BIRDS OF A FEATHER. The Technology sector (IXT—candlestick) and the Staples sector (IXR—purple line) aren’t ones you typically associate. But this year-to-date chart shows a similar performance pattern, which may or may not be coincidental. Tech continues to benefit from general bullishness that’s driven it for years, while Staples might be getting a lift from dividend-seeking investors in a low-yield environment. The current “defensive” trading pattern on Wall Street also might be helping Staples. Data Source: S&P Dow Jones Indices. Chart source: The thinkorswim® platform. For illustrative purposes only. Past performance does not guarantee future results.

Delta Variant Could Clip Medical Device Industry: A year ago, many Health Care companies felt the heat from COVID. Though a few saw their shares soar on vaccine development, those that make medical devices—often part of elective surgeries like joint replacements—saw demand fall. Then things opened up a bit this spring and brought some improvement as many people resumed going in for elective care. Unfortunately, the Delta variant appears to be putting the kibosh on that.

Many hospitals are already cutting back on routine work, the Washington Post reported this week. Duke University Hospital has begun canceling some surgeries, including joint replacements and non-urgent hysterectomies. In Oregon, deferrals of elective surgery are simply necessary as hospitals fill up with Delta variant patients. Want an update on how this might be affecting a major medical device firm? Consider checking Medtronic’s (NYSE:) earnings call this coming Tuesday. Last time MDT reported, in late May, CEO Geoff Martha told investors and analysts that most of the company’s end markets “are returning to near normal, pre-COVID growth” and that the company felt confident about the year ahead. Has that outlook changed thanks to the Delta variant? Stay tuned.

Instability In Stablecoin Market? A little-covered topic in the recent Fed minutes is a brief discussion on so-called “stablecoins,” or cryptocurrency pegged to fiat currency, in our case, the US dollar. According to the minutes, a chief point of concern for the Fed is the lack of transparency that comes with digital coins supposedly pegged to dollars. For instance, how might anyone know if a stablecoin actually has any collateral backing it? And if it doesn’t, what’s to stop any stablecoin issuer from inflating the unregulated crypto “money supply,” and how might that disrupt the Fed’s tapering process? Also, bear in mind that, similar to China— and other countries for that matter—the Fed is looking into the prospects of developing a digital U.S. dollar. Though the “Fedcoin,” as some people may call it, is still in its early research phase, it appears possible, if only to remain competitive with China’s digital yuan, should its international adoption begin to match or outpace other forms of digital payment.

Fed Minutes and : Although Bitcoin isn’t a stablecoin—rather, it’s more like the anti-stablecoin, if anything—any talk of cryptocurrency regulation can sometimes spook the cryptomarkets. Apparently, bitcoin futures (BTC) weren’t all that affected by the Fed minutes discussion on cryptocurrencies, continuing to trade sideways and consolidating between 44,000 and 48,000. BTC also may now be in the early stages of what appears to be a small (technical) diamond top pattern. In all practicality, this indicates no directional bias, and it’s more of a tactical trader thing. But it does paint a picture of the tight consolidation that’s taking place as crypto investors try to figure out the near-term and long-term implications of the seemingly tumultuous events going on in the markets, from Fed tapering and Delta fears to the regulatory crypto agitation going on behind closed doors.