After another big rally to start the week, what can Wall Street do for an encore?

Maybe not a lot, at least for the moment. Stocks moved up just a bit in pre-market trading. It looks early like there might be a chance for small gains on top of what happened yesterday, but lack of major new developments may keep things on a simmer.

Having said that, the “risk-on” atmosphere we saw yesterday doesn’t appear to be retreating, with Treasury yields and crude edging up early following a strong Tuesday in Asia’s markets.

The calendar today isn’t completely empty. New home sales and Best Buy (NYSE:) this morning absolutely crushed it, sending shares of the company to 4% gains ahead of the open. When you look over retail earnings, it’s been basically one highlight reel after another this quarter, though the clock is running down toward the end of the contest very quickly.

As BBY noted in its release, the company lapped last year’s strange lockdown period where customers were mostly limited to curbside service and in-store appointments about half of the time. However, results were strong even compared to two years ago. It’s good to see companies making that comparison so you can get a sense of performance vs. pre-COVID times. BBY also raised comparable sales guidance for the second half of the fiscal year, though it still thinks there could be a decline. It didn’t seem affected by all the recent shortages.

BBY was a report some people were nervous about going into, so the strong outcome might be one thing giving stocks a little lift, along with strength in China. Also, crude is up again and looking like it might be ready to march back to $70 a barrel.

With the Fed’s Jackson Hole meeting looming at the end of the week, there’s a chance the market could wander around this week looking for some sort of conviction one way or another. For many people, it’s just very confusing as to where to go and what to do right now because there’s so many mixed messages coming through.

There’s lighter volume, which is understandable because it’s the end of summer. But we may also be seeing lighter volume over the last few days because it’s hard to have true conviction right now one way or the other. Perhaps the Fed can show us a path forward. Still, judging from yesterday’s solid upward move, the path of least resistance seems to be higher.

Speaking of higher, for July came in above analysts’ average estimate yesterday at a seasonally-adjusted annual pace of 5.99 million, according to the National Association of Realtors. High prices and low supply continue to tell us housing demand remains strong. But if you peek a bit deeper into the data, there are some signs of cooling. The supply of existing homes on the market clicked up to 2.6 months’ worth, from 2.5 months the previous month. And the median price rose 17.8% year over year, down from 23.2% a month earlier.

One cautionary note continues to be around the “breadth” and depth of this rally. The major indices seem to be making new highs pretty regularly here. But as we noted yesterday, so much of this reflects some of the “mega-caps” and their huge weighting.

Monday offered more evidence of that. By late in the session, you could almost throw a bunch of darts at a board with all the “mega-caps” and it would be bound to hit shares that were higher. It wasn’t just the “FAANGs,” either, though they were all making nice gains. It also included Microsoft (NASDAQ:), Tesla (NASDAQ:), Nvidia (NASDAQ:), and JPMorgan (NYSE:), all among the most highly capitalized companies in the market.

Recently, this was happening without as much participation lower down, so to speak. Most worrisome was weakness in the Index of small-cap stocks, which is sometimes seen as a barometer for the rest of the market. When it starts to flag, as it did in mid-2018, sometimes that can indicate trouble for everyone up ahead. Another sign of possible trouble is when the mega-caps keep climbing but the rest of the market sags. As one observer said recently, you need some soldiers along with the generals.

RUT actually outpaced the broader market Monday, but keep watching this relationship. Last year, the biggest mega-cap names were able to carry the torch through summer but faltered in autumn. If they start to lose ground, there might not be enough depth underneath them to prevent a decent pullback.

For now, it doesn’t seem like too many people are worried about a pullback judging from how things went on Wall Street to start the week. News that the U.S. Food and Drug Administration (FDA) had approved the COVID vaccine made by Pfizer (NYSE:) and BioNTech (NASDAQ:) gave the market a shot in the arm, if you will, and nine of the 12 S&P sectors gained ground Monday. Energy got the biggest boost, along with “reopening” stocks, maybe because of ideas that official approval might cause more companies to require employees to get the shots.

Perhaps investors think official FDA approval will convince more of the hesitant to get their vaccines, causing severe cases to fall. Airlines, hotels, restaurants and casinos were some of the sub-sectors starting the week on a positive note.

Autos have been another sub-sector under scrutiny lately, and this morning saw strong earnings from Advance Auto (AAP). The company beat Wall Street consensus estimates on revenue and earnings, with comparable sales up nearly 6% year over year, but shares were lower in pre-market trading. This is one you get every so often that makes you scratch your head a bit. 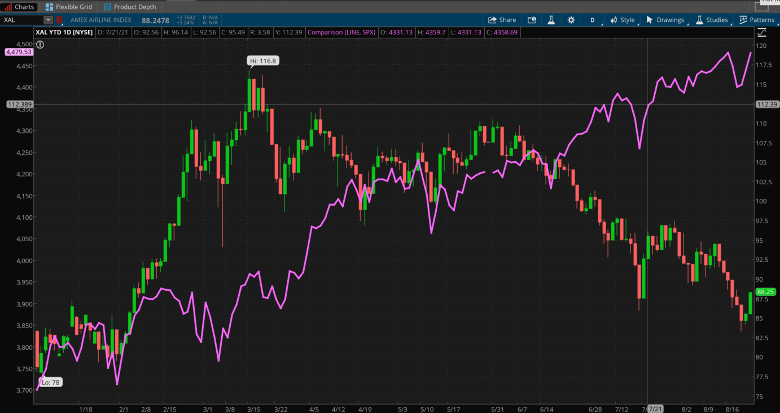 CHART OF THE DAY: TAKING OFF? JUST BARELY: Airline stocks (XAL—candlestick) had a good day Monday after the FDA approved Pfizer’s COVID vaccine, but they haven’t really gotten much altitude most of the year, trailing the S&P 500 Index (SPX—purple line) by a wide margin. Data Source: NYSE, S&P Dow Jones Indices. Chart source: The thinkorswim® platform. For illustrative purposes only. Past performance does not guarantee future results.

Valuation Still Historically High, But Solid Earnings Chip Away: It’s been a while since we discussed market valuation. You probably know it’s been historically high lately, but the nearly 90% average Q2 earnings growth for S&P 500 stocks took some of the edge off.

Recently, the 12-month forward price-to-earnings ratio for the S&P 500 dropped to around 21.1, according to FactSet. That’s still well above the 18.2 five-year average, but down slightly from peaks earlier this year. The drop in P/E comes even as the SPX continues scraping up against recent all-time highs, and the only way you can see the index go up and P/E go down at the same time is strong earnings.

The caveat is that Q2 earnings growth was measured against one of history’s worst earnings quarters a year earlier during the first phase of COVID. Still, you can’t ignore that net profit margin for S&P 500 companies in Q2 was 13%, above the five-year average of 10.6%, according to FactSet. Also, analysts continue to expect solid increases in earnings for Q3, Q4, and 2022. You can’t call the recent earnings success a COVID fluke. Companies are thriving across every sector.

Mega-Caps Powered Q2 Growth, But They Weren’t Alone: Of course you could say robust corporate health mostly reflected in an that as of Monday’s close was around double the March 2020 COVID low. An 18-month doubling time is unlikely to happen again, and probably reflects the quick turnaround from those early dire predictions of what COVID might do to the economy. Having said that, the SPX is still up a solid 31% from its pre-COVID high posted in February 2020. That’s no small feat, considering the proverbial “wall of worry” it’s had to climb.

The other caveat you could throw out there is one we’ve mentioned many times. The rally got powered to a great degree by a bunch of “mega-cap” stocks that swing an amazing amount of weight in the index with their trillion-dollar valuations. There’s something to be said for that, until you look at the year-to-date sector view and see that energy, financials, real estate, and health care are among the leaders. None of these sectors feature a single $1-trillion company.

Surprise Pattern: It’s interesting to see that the market’s surge Friday and Monday came after a recent jump in volatility. Volatility increased 20% last week, marking the seventh surge that high since March 2020, according to Instinet. The market calmed following each of the first six spikes in volatility, Barron’s reported, and the majority of the time, the SPX moved higher in the following weeks. Again, there’s no rule that history has to repeat itself, but this time it does seem to be happening. Volatility fell back to start the week, with the Cboe Volatility Index () back below 18 after topping 20 a week ago. VIX is a tad higher this morning just above 17, but that’s probably more about people looking for possible protection ahead of Fed Chairman Jerome Powell’s speech this Friday.