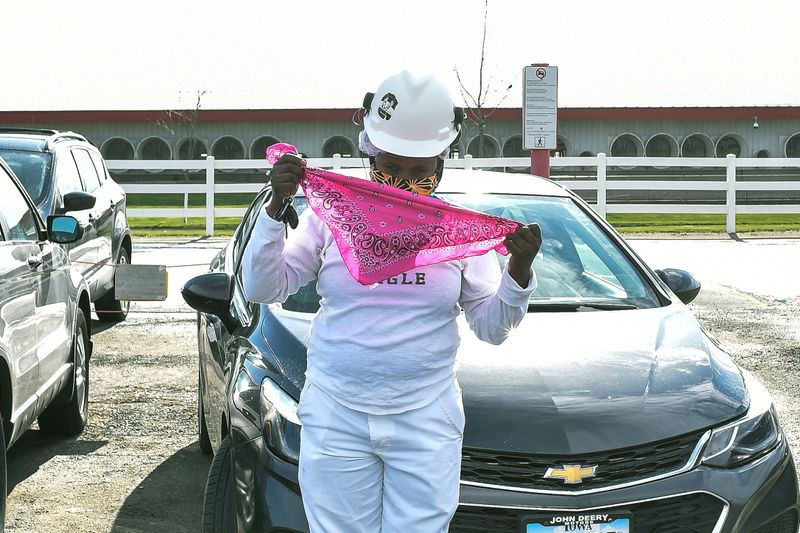 © Reuters. FILE PHOTO: A Tyson Foods employee puts on a second protective mask outside of the company’s meat processing plant, which has been hit by a coronavirus disease (COVID-19) outbreak, in Waterloo, Iowa, U.S. April 22, 2020. Picture taken April 22, 2020. Jef

CHICAGO (Reuters) -Tyson Foods Inc said on Friday that labor unions have agreed to support its requirement for U.S. employees to be vaccinated against COVID-19 by November, and the company will offer new benefits to workers including paid sick leave.

Companies have been working to incentivize employees to get vaccinated through bonuses and other benefits as the highly contagious Delta variant drives an increase in U.S. coronavirus infections. In some instances, employees who do not get shots face penalties like higher insurance costs.

Tyson, the biggest U.S. meat company by sales, said on Aug. 3 that U.S. employees must get vaccinated, though the requirement for unionized plant workers was subject to negotiations.

The company has now won support from the United Food and Commercial Workers (UFCW) International Union and the Retail, Wholesale and Department Store Union, which represent more than 80% of Tyson’s 31,000 unionized workers in the United States, it said in a statement.

The UFCW, America’s largest meatpacking union, said it secured 20 hours of paid sick leave per year for Tyson employees as part of negotiations over the mandate. It is the first national U.S. agreement to provide paid sick leave to meatpacking workers, the union said.

All Tyson employees can begin earning the 20 hours starting on Jan. 1, the company said.

The UFCW initially expressed concerns over the mandate because the U.S. Food and Drug Administration had not fully approved vaccines, instead granting approval for emergency use. Last week, the FDA granted full approval to Pfizer (NYSE:) Inc/BioNTech SE’s shot.

Some workers can be exempt from the mandate for religious or medical reasons, according to the UFCW.