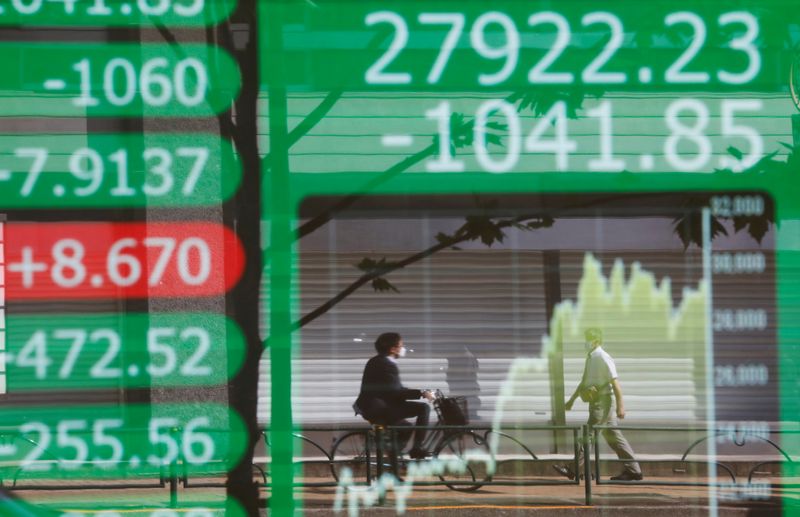 © Reuters. FILE PHOTO: People are reflected on an electric board showing Nikkei index and its graph outside a brokerage at a business district in Tokyo, Japan, June 21, 2021. REUTERS/Kim Kyung-Hoon

TOKYO (Reuters) – A global stocks index hit a record high on Tuesday as investors took comfort in growing views the U.S. Federal Reserve is likely to delay the start of tapering its asset purchases and maintain its expansive monetary policy for the near-term.

European bourses are expected to dip, however, after gains on Monday, with Euro Stoxx futures down 0.1% and futures trading 0.3% lower.

The world’s shares, measured by MSCI’s gauge of 50 markets, tacked on 0.1% to log their eighth consecutive day of gains to record highs.

“Now that the tapering announcement from the Fed in September seems unlikely, we should expect ‘Goldilocks’ markets to continue to at least October or November,” said Masahiko Loo, portfolio manager at AllianceBernstein (NYSE:).

The U.S. economy created 235,000 jobs in August, the fewest in seven months as hiring in the leisure and hospitality sector stalled, reducing expectations of an early tapering by the Fed.

“It’s the service sector that is losing steam and that clearly shows the impact of Delta variant,” said Norihiro Fujito, chief investment strategist at Mitsubishi UFJ (NYSE:) Morgan Stanley (NYSE:) Securities. “And the Fed has no reason to insist on tapering this year if the Delta variant is having an impact.”

Tokyo’s rallied 0.9% also helped by an announcement on its reshuffle .

Mainland Chinese shares extended gains, with the rising 0.8% to reach its highest since February, helped by Chinese trade data showing both exports and imports grew much faster than expected in August.

“The mood is improving on hopes the government will take measures to support the economy and that the monetary environment will be kept accommodative,” said Wang Shenshen, senior strategist at Mizuho Securities.

U.S. were 0.1% higher from Friday’s close after the U.S. holiday on Monday. Bond prices eased slightly, pushing up their yields, with the 10-year U.S. Treasuries yielding 1.339%, up 1.3 basis points.

In the currency market, the euro changed hands at $1.1884, a tad below Friday’s one-month peak of $1.1909 but still well-supported ahead of the European Central Bank’s policy meeting on Thursday.

The ECB is seen debating a cut in stimulus with analysts expecting purchases under the ECB’s Pandemic Emergency Purchase Programme (PEPP) falling possibly as low as 60 billion euros a month from the current 80 billion.

The Australian dollar rose after the central bank went ahead with its planned tapering of bond purchases, but quickly gave up those gains after the bank reiterated its need to see sustainably higher inflation to raise interest rates.

“It obviously wasn’t a completely hawkish statement by any means,” said Sean Callow, currency analyst at Westpac in Sydney. “For the most part you’d generally regard them as being quite optimistic on the growth prospects for the next year or so…but we shouldn’t forget it’s dovish guidance on the cash rate.”

Fastned, Tesla to power up Oxford with EV charging superhub By...