Home Global Market Is Tesla A Buy In 2022 After Slipping Into Bear Territory?


Buying Tesla (NASDAQ:) shares has been a very profitable trade when it goes through a major correction. As we say farewell to 2021, the world’s largest car-maker by value, is presenting a similar risk-reward preposition.

Tesla stock, after falling more than 20% since reaching a record high in early November, is in a bearish spell. With that steep slide, the electric car-maker’s market valuation fell under $1 trillion. 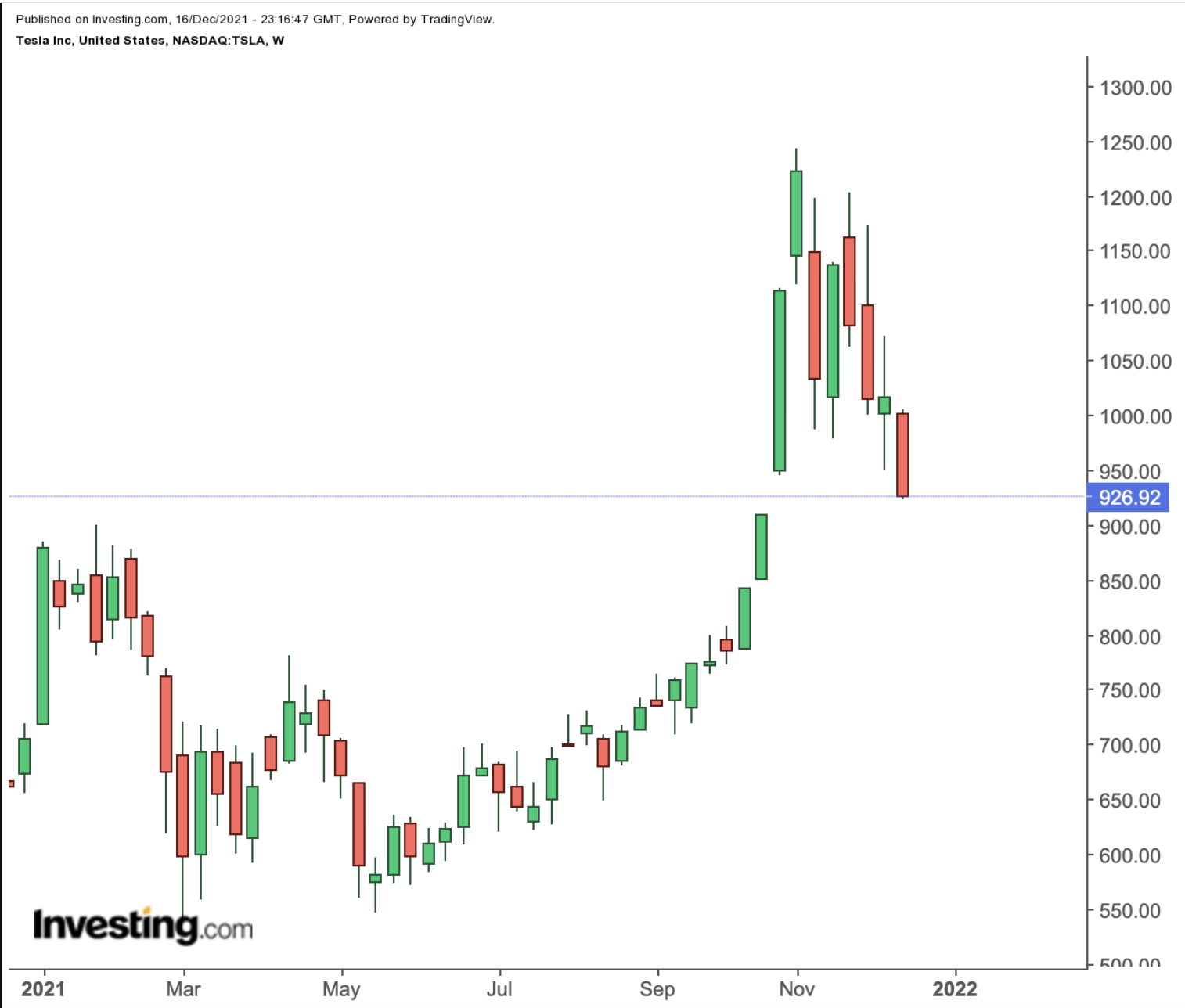 But long-term investors in Tesla stock are used to these ups and downs, which are often prompted by CEO Elon Musk himself. The latest bout of selling pressure started after

Musk publicly announced he would sell his 10% stake in the company after conducting a Twitter poll. Since then, he has sold a total of $12.7 billion worth of stock over a five-week period.

Tesla’s extreme volatility, without any fundamental catalyst, highlights the dilemma that many long-term investors who are averse to extreme moves, face. Even after the recent plunge, Tesla stock is still up 36% in 2021, after surging more than eightfold the year before.

After this stunning rally, it’s hard to recommend this stock from a fundamental standpoint. Tesla is, no doubt, dominating the electric-vehicle market and its lead would be hard to surmount, but its stock is trading at extremely elevated multiples.

According to InvestingPro analysis, Tesla stock is trading at a 12-month price-to-earning multiple of 279, a level that has set the performance bar so high that there is no space for the car-maker to make any error when it comes to financial performance.

Due to this extremely rich valuation, Tesla’s stock could be a risky bet based on InvestingPro’s model, which assigns Tesla $743.35 a share fair value, 22% downside risk from the current level.

That being said, any pullback in Tesla shares has proven to be a lucrative trade for buyers on a dip. According to Morgan Stanley’s Adam Jonas, Tesla will remain the leader in EV manufacturing, batteries and autonomy in the foreseeable future, making it a suitable candidate for long-term investors.

“We look ahead to FY22 with expectations of strong automotive profitability, but increasingly difficult comps and potential narrative changes that may challenge conventional expectations about the EV strategy. If you must own stocks in this industry, please be very selective.”

“Embedded within the company is a fast-growing, high-margin software business that has the potential for highly recurring revenues from its connected car software and services business.”

Wedbush Securities, one of the most bullish forecasters on Tesla, gave a new $1,400 price target to the stock, saying the company could win half of what is set to be a $5-trillion EV market.

According to analyst Dan Ives, Telsa should benefit from both President Joe Biden’s $550-billion infrastructure bill, which is set to boost the country’s electric vehicle industry, as well as improving demand in China.

“This green tidal wave will result in a $5-trillion market opportunity over the next decade, with Tesla leading the way.”

Tesla stock will likely remain volatile in 2022, given a high level of speculative interest in this name. That said, investors could take advantage of any pullback that takes its shares closer to their fundamental value, like the one calculated by the InvestingPro models.