Surging prices will undoubtedly help the British oil giant, but those gains could be offset by the BP’s (NYSE:) decision to exit its nearly 20% position in Russia’s government-controlled oil producer Rosneft (OTC:)…

BP is scheduled to release its earnings on Tuesday, May 3 after the closing bell.

What are analysts expecting for BP’s Q1 earnings?

Consensus earnings expectations are for BP to report $1.41 in EPS on $53.1B in revenue.

Surging oil prices will undoubtedly help the British oil giant, but those gains could be offset by the company’s decision to exit its nearly 20% position in Russia’s government-controlled oil producer Rosneft. Analysts estimate that the financial hit from Rosneft could approach $25B and will undoubtedly mar otherwise strong operating results.

That said, the market is always forward looking, and the Rosneft situation was widely publicized, resulting in an immediate 5% drop in BP’s stock back in late February. Accordingly, traders will be more interested in the business’s traditional operations. On that front, my colleague Josh Warner noted that:

Additionally, the tremendous volatility in oil and prices throughout Q1 should contribute positively to BP’s trading profits, mirroring a similar windfall at Shell (NYSE:).

One other development to watch is BP’s share buyback program. Industry analysts are speculating that BP could be the only major oil company to increase its buybacks this quarter, with some forecasting an increase from $1.5B to $2B. If the company can deliver on this speculation, it would help support the stock, regardless of backward-looking earnings results.

Where next for BP stock?

Shares of BP have performed relatively well over the past year, though at just below a 20% rise, they still trail rivals Chevron (NYSE:) and Exxon (NYSE:), which have both gained about 60% over the last twelve months. Looking at the chart, BP has consistently found support at its rising 200-day EMA over the last nine months, and as we go to press, shares are showing nascent signs of another bounce off that key level, as well as the bullish trend line off the July lows.

A strong earnings report could pave the way for a retest of the April highs in the mid-$31.00 range, with a break above that level potentially exposing the 2022 high near $34.00 as we move into the summer. Meanwhile, a break below support in the $28.00 would erase the bullish bias and point to a deeper pullback toward the mid-$20s. 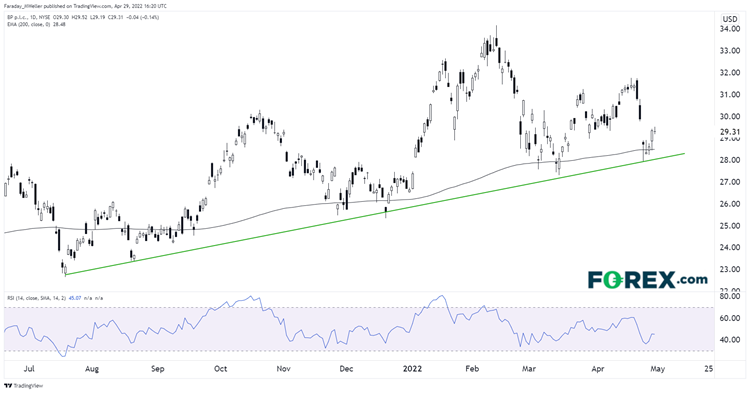 Jazeera Airways plans to get around $2 billion from banks for...