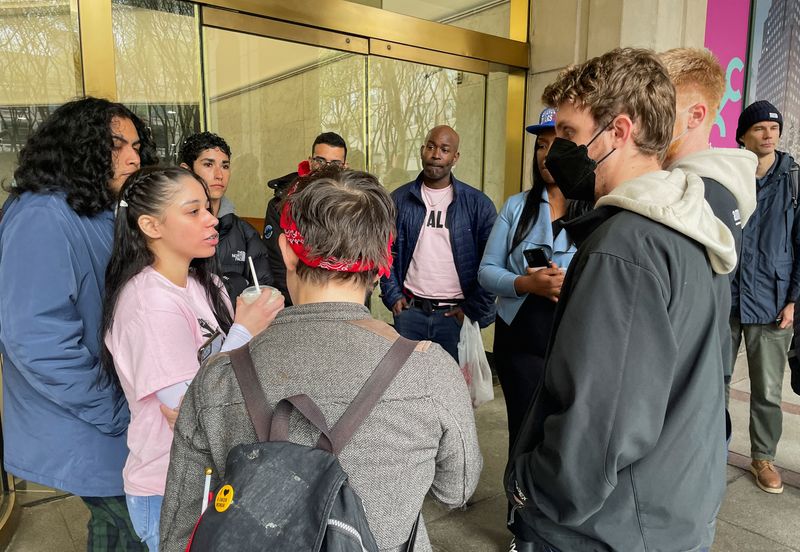 NEW YORK (Reuters) – Two warehouses facing another, each the length of four football fields, speed goods to Amazon (NASDAQ:) customers in New York City and beyond from the western shore of Staten Island. They are part of the same operation, hire from the same communities and decided within 30 days of each other whether to join the same union.

One voted in favor; the other against.

Interviews with employees at LDJ5, the facility that on Monday rejected joining the Amazon Labor Union (ALU), show why different work roles, schedules and people may lead to opposite outcomes in campaigns to organize. A look inside the two gray buildings also explains some of the difference.

The warehouse known as JFK8 is what Amazon calls a fulfillment center. It has more than 8,000 workers who stow, count, pick and pack thousands of goods over 10-to-12 hour shifts. When COVID-19 exploded in New York in the spring of 2020, JFK8 staff faced infections, Amazon trialed safety measures and some workers protested to demand the site’s closure.

Those protesters, among them Christian Smalls and Derrick Palmer, later founded the ALU and won the first U.S. union vote in Amazon’s 27-year-history, using their intimate knowledge of the warehouse. Some 55% of employees who cast ballots in the JFK8 election voted to join them.

That margin was roughly reversed at LDJ5 — a sister site that did not even exist when Smalls and Palmer began protesting. Less than two years ago, Amazon opened the facility and employed a fifth as many workers, in another slate of roles.

For Dominque Booker, who worked in both buildings, her job at LDJ5 was “really easy” compared to JFK8. “Your feet ain’t hurting; your back ain’t hurting.” She voted against the union.

In LDJ5, staffers sort already-packaged orders by zip code in the middle of their journey to customers. Maria Rios, who also voted against unionizing, said she works four-hour shifts with a 45-minute break in between. Her job is flexible, allowing voluntary time off and extra hours if she wants more pay, she said.

“Amazon is not the monster they’re trying to portray,” Rios said.

Labor advocates have long criticized Amazon for its exacting work, productivity targets and above-average injury rates at warehouses. Likewise, they fault the company for holding mandatory meetings to warn workers about unions.

Amazon has said it simply wants staff to know the facts, that it invests heavily in safety and that its goal-setting is fair. “We’re glad that our team at LDJ5 were able to have their voices heard,” spokesperson Kelly Nantel said.

The union won some support at LDJ5, including the vote of Jose Perez, who said he wants better pay for walking 10 to 12 miles (16 to 19 kilometers) a day on the job. In New York, making “$18.25 is not enough to generate a savings and still afford to put a roof over your head,” he said.

But Perez was outnumbered 618 to 380 by associates like Iveliz Rivera, who said the ALU’s demand for $30 an hour was unrealistic and that unionizing could mean taking dues out of her paycheck. “That’s money I depend on for my child,” she told Reuters.

Workers from more than 100 U.S. Amazon facilities have reached out to the ALU to discuss organizing. Employees at JFK8 have looked for signs of change after the first vote, too.

But the ALU faces challenges on both fronts: defending its first win against Amazon’s objections so it can start bargaining, and finding organizers to lead the charge within other Amazon sites.

John Logan, a labor professor at San Francisco State University, said, “The grassroots character of the organization can both help and hurt. It doesn’t have deep pockets and so much of the success of these worker-driven organizing campaigns depends on the energy, enthusiasm and momentum created by victories.”

For all the benefits the ALU gained from its JFK8 ties, organizers met their match in LDJ5: trusted insiders who encouraged peers to vote no. Worker Esther Jackson shared concerns that ALU leaders organized because they had been fired.

“This union is not built out of love,” she said.