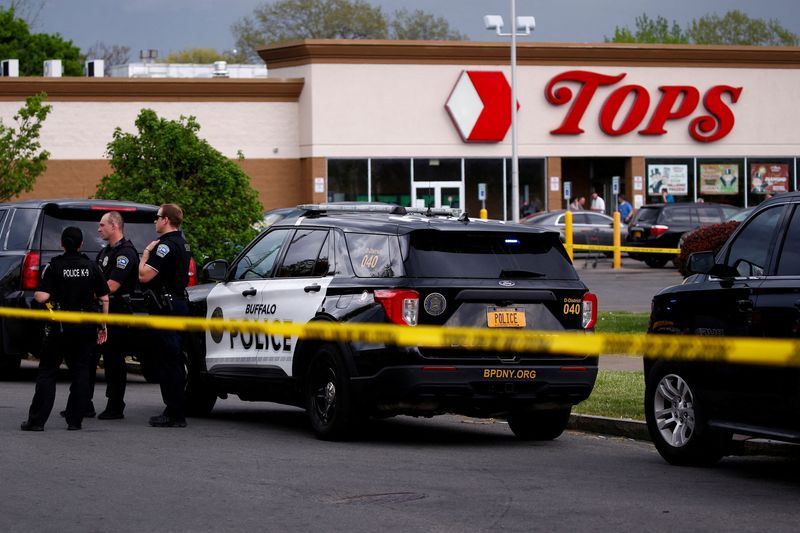 By Tim Reid and Kanishka Singh

(Reuters) – An 18-year-old white man suspected of fatally shooting 10 people in a Black neighborhood in Buffalo, New York, appears to be the latest in a line of “copycat” gunmen carrying out deadlier mass shootings inspired by previous attackers, experts warned on Sunday.

Payton Gendron, who surrendered to police on Saturday after the attack, apparently publicized a racist manifesto on the internet and broadcast the attack in real time on social media platform Twitch, a live video service owned by Amazon.com (NASDAQ:). Authorities called the mass killing an act of “racially motivated violent extremism.”

Experts say the trend of mostly young white men being inspired by previous racist gun massacres is on the rise, citing recent mass shootings, including the 2015 attack at a Black church in Charleston, South Carolina, a 2018 shooting at a synagogue in Pittsburgh and a 2019 attack at a Walmart (NYSE:) in an Hispanic neighborhood of El Paso.

Adam Lankford, a criminology professor at the University of Alabama, has studied trends in mass shootings over time. His 2020 study analyzing victim data showed that the “deadliest” shootings – where more than eight people are killed – had doubled in number since 2010, compared to the previous 40 years.

“It’s clearly not just random. They are not people dreaming this up on their own. They are learning it from each other,” Lankford said.

He added: “They want to be like the previous attacker, who is a role model.”

Lankford said the rise in these copycat mass killings have a specific trend: the gunmen find their inspiration from the personal life details of previous mass shooters. “It’s not repeating the incident that inspires them. It’s the intimate details of their lives that promotes the influence,” he said.

Lankford said one way to try and combat the rise in such hate crimes is for the media to avoid publishing details of the shooters personal lives.

Hate-motivated mass shootings and fame-seeking perpetrators have rapidly increased since 2015, according to an analysis by The Violence Project, which tracks mass shootings in the United States.

“From what he wrote online, by his own account he was radicalized through participation in these forums,” Susan Corke, director of SPLC’s Intelligence Project, said in an emailed statement.

The SPLC said that even though it had not seen any evidence yet of the gunman’s affiliation to a specific far right or racist group, there were red flags.

“He discussed building up a weapons cache and asked detailed questions about body armor on a Discord channel dedicated to gun culture. He also posted about allegedly killing a cat and dismembering it. He appears to have posted detailed plans for an attack as early as two weeks ago and posted frequently after that about his planning,” Corke added.

The SPLC said it had obtained a transcript of the suspect’s Discord chat log, adding they have “high confidence” when asked about its authenticity. Reuters could not independently authenticate the postings.

Social media and streaming platforms like Twitch, which said it removed the stream of Saturday’s shooting after less than two minutes, have grappled with controlling violent and extremist content for years.

The live-nature of the broadcasts make it particularly difficult to moderate as streaming platforms do not have time-delays like television broadcasts. Facebook (NASDAQ:) has sought to address the livestream violence issue in 2019 after allowing 17 minutes of a livestream of a mass shooting in Christchurch, New Zealand, before taking it down. It now has a one-strike policy which temporarily restricts users after breaking a rule.

New York Governor Kathy Hochul said on Sunday the stream should have been taken down faster and that she would take the matter up with social media platforms.