During the final three years of the 1990s, Home Depot (NYSE:) shares gained over 500%. A strong economy and a booming stock market led consumers to spend heavily on their homes. 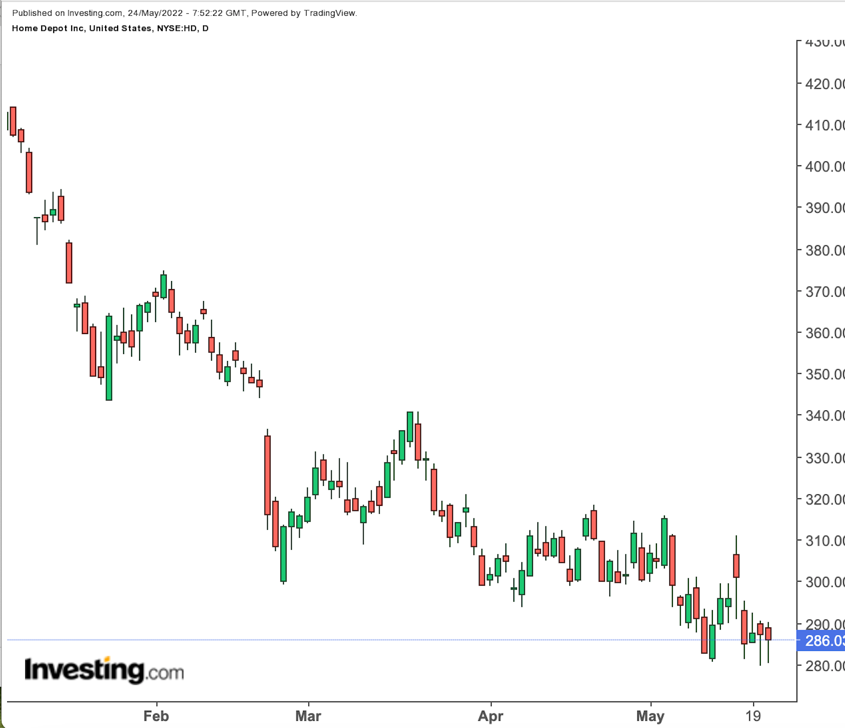 Between the end of 2018 and the end of 2021, shares of the Atlanta, Georgia-based retailer rallied 142%. Growth in the now far more mature business obviously was much slower than it was two decades earlier but, in context, still impressive.

Again backed by a booming stock market—though, owing to the novel coronavirus pandemic, admittedly a more inconsistent economy—between FY2018 and FY2021 Home Depot increased sales by 40%. EPS gained 60%, and the figure in FY2021 was more than double that from four years earlier.

Obviously, Home Depot now is a very different company from what it was then. But even with sales roughly four times as high as they were in FY1999, HD stock remains a cyclical play. That’s been a problem before—and even after a big pullback, it could be a problem again.

As noted, the home improvement retailer closed the 1990s on a high note. But the stock market bubble would peak barely two months into the new decade; an eight-month recession would follow the next year.

Unsurprisingly, Home Depot’s business took a hit. Same-store sales declined in both fiscal 2001 and fiscal 2002. Profits did continue to rise but, in large part, because the company still was building out new stores (the store count doubled between FY2000 and FY2004).

But the news was far worse for HD stock. Shares closed 1999 at $68.75. Incredibly, they would not return to that level for more than thirteen years.

Obviously, there are enormous differences between then and now. At $68.75, HD traded at 67x FY1999 earnings. At the end of 2021, the price-to-earnings (P/E) multiple was 27x. The thirteen years of lost returns for HD stock included not just the 2001 recession, but the 2008-09 financial crisis and the ensuing, relatively stagnant, initial recovery.

Of course, Home Depot, at the end of 1999, had far more room for growth. As noted, the company was able to double its footprint over the next four years; Home Depot’s store count has grown less than 2% total over the past five years. All else equal, Home Depot stock should have received a far higher multiple then; it was a growth stock in a way that it simply can’t be anymore.

Taking the broader view, in both 1999 and 2022, Home Depot was a wonderful business. The company without question is one of the great retailers in American history.

But for more than a decade, that wasn’t enough to save Home Depot stock. That history shows that investors can’t rely on quality alone to save HD this time around.

Obviously, to at least some extent, the market has quickly absorbed that history lesson. HD stock incredibly has declined 31% so far this year. Even in the context of past cyclical plunges, that kind of fall might tempt investors to step in.

But the size of the decline, too, might not be enough. Home Depot stock is cheaper—but it’s not necessarily cheap. Shares still trade at 18x trailing twelve-month earnings.

That’s not a particularly compelling multiple for a retailer or a cyclical stock. It’s also a multiple based on results achieved during a booming period for housing, and likely with some lingering benefits from the pandemic. (With travel spending still somewhat muted, and more time spent at home, consumers have more cash and more reason to invest in their homes.)

In other words, there’s a strong argument that though HD stock is still trading at 18x peak earnings, without the potential for store count improvement, there’s an equally strong argument that earnings are going to decline. That may not happen this year: Home Depot in fact raised its after first quarter last week.

But the market looks ahead, and there seems a real chance of an earnings decline in fiscal 2023. Recession risks are rising. There’s evidence that the housing market has peaked. adds another threat.

Investors, so far this year, have reacted quickly to those rising risks. But the current valuation doesn’t suggest they’ve reacted quickly enough. While HD stock at 30% below its peak might seem like a steal, investors could have made and did make the same argument in 2000 and in 2007. In both cases, they were far too early. History may well repeat.

Admittedly, it’s possible this commentary is simply too bearish. It’s worth repeating: Home Depot is a wonderful business. The housing cycle will have its effects here and there, but nonetheless, over time, the stock rallies. Even investors who bought at the end of 1999 eventually did quite well: including dividends, HD stock has returned over 9% annually since then.

The housing market may hold up. Demographic shifts to out of urban areas into lower-priced markets may create more homeowner cash to invest in renovations—and more square footage in which to invest that cash. Recession risks could be overblown.

Over the long haul, yes, HD stock still looks like it could be a winner. But that doesn’t mean there’s any need to rush, or that the 30% decline makes the stock ‘cheap’. There remain an awful lot of risks here, and it does not appear that all of those risks are priced in.

And a lot more. Get all the key data fast, so you can make an informed decision with InvestingPro+. Learn More »