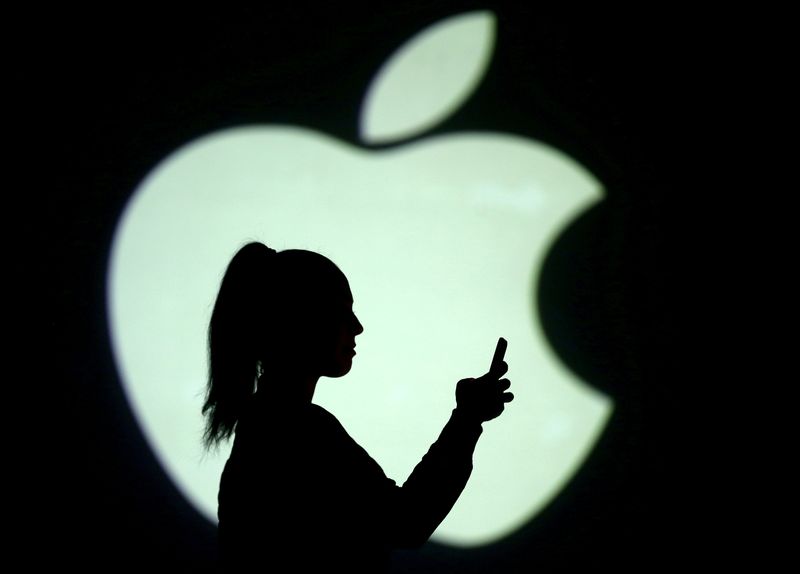 © Reuters. FILE PHOTO: Silhouette of a mobile user seen next to a screen projection of the Apple logo in this picture illustration taken March 28, 2018. REUTERS/Dado Ruvic/Illustration

WASHINGTON (Reuters) -Republican senators want to bar U.S. app stores including Apple and Google from hosting apps that allow payments to be made with China’s digital currency, amid fears the payment system could allow Beijing to spy on Americans.

The bill, unveiled Thursday and first reported by Reuters, states that companies that own or control app stores “shall not carry or support any app in [their] app store(s) within the United States that supports or enables transactions in e-CNY.” It is sponsored by Senators Tom Cotton, Marco Rubio and Mike Braun.

According to Cotton’s office, digital yuan could provide the Chinese government with “real-time visibility into all transactions on the network, posing privacy and security concerns for American persons who join this network.”

The Center for a New American Security, a Washington, D.C.-based think tank, said in a January 2021 report that China’s digital currency and electronic payments system was “likely to be a boon for CCP surveillance in the economy and for government interference in the lives of Chinese citizens,” noting that “transactions will contain precise data about users and their financial activity.”

The move comes after WeChat, a messaging and payment application owned by China’s Tencent with over 1.2 billion users, announced it would begin supporting the currency earlier this year. Alipay, the hugely popular payments app owned by Jack Ma’s Ant Group, also accepts the digital currency. Both apps are available in the Apple and Google App stores.

The Chinese Embassy in Washington called the legislation “another example of the United States wantonly bullying foreign companies by abusing state power on the untenable ground of national security.”

While stopping potential national security threats related to China is a rare point of bipartisan agreement in the deeply divided U.S. Congress, prospects for the bill’s passage ahead of midterm elections are uncertain.

5 Retailers Likely to Gain on Earnings Results This Month