Shares of Chewy Inc (NYSE:) surged over 20% higher Thursday after the pet products retailer a stronger-than-expected first-quarter profit and published a revenue forecast that was ahead of analysts’ estimates.

The company wrote in its letter to shareholders:

“At the time of our fourth-quarter 2021 earnings report in March, we characterized the environment as a tug-of-war between the fundamentally strong consumer demand that underpins our business and the challenging operating environment.

When evaluated through that lens, first-quarter 2022 was not much different, which is why we are even more proud of our results.”

Looking ahead, the retailer said it expects Q2 revenue in the range of $2.43 billion to $2.46 billion, while analysts were looking for $2.44 billion. The company reiterated its full-year revenue forecast range of $10.2 billion to $10.4 billion, compared to the consensus projection of $10.26 billion.

Sumit Singh, CEO of Chewy, said the company had a solid start to fiscal 2022 after driving a 14% top-line development and seeing significant improvements in gross margin and profitability numbers.

Meanwhile, the latest data from the Conference Board showed that consumer confidence dipped in May as record-high in the U.S. weighed on consumers’ view of their current and future prospects.

The non-profit research group said that its consumer confidence index slipped to 106.4 last month from 108.6 recorded in April. Furthermore, the Conference Board also said its present situation index, which gauges consumers’ view of the present business and labor environment, also declined in May to 149.6 from 152.9 in April.

The expectation index, which measures consumers’ view of the six-month forecast for business and income conditions, was down at 77.5 in May from 79 a month before. The expectation index stood at 80 in February and still remains one of the weak spots of the research survey.

Last month, the Fed hiked its key borrowing rate by half a point, with additional rate hikes expected to come later this year as inflation continues to grow at the fastest pace in over 40 years, driven by monetary policy, geopolitical tensions, surging energy prices, and supply chain constraints.

Chewy stock is still trading over 50% down YTD, although the latest earnings report could act as a spark for shares to stage a relief rally given the magnitude of the selloff in recent months.

Retail traders were heavily involved through the WallStreetBets subreddit, which largely impacted the world of stock trading. As a result, Robinhood (NASDAQ:) decreased in popularity, but Ryan Cohen’s popularity only increased, with his younger persona of an entrepreneurial disrupter who founded Chewy at 25. As a result, Chewy has since been trending on the forum.

Yet it’s not just retail that sees Chewy as an attractive option. Evercore ISI analyst Mark Mahaney hiked the price target on Chewy’s stock from $57 to $58 per share, describing the company’s valuation as “extremely engaging.” The prominent market analyst added:

“We still see Chewy facing current headwinds in the form of cost inflation, re-opening pressures, and some consumer demand softness, so we see the path to improved Macro conditions eventually serving as fundamental tailwinds (timing unknown),”

RBC’s Steven Shemesh expects stronger sales in the second half of the year, “which should result in share upside even if modest cost pressure persists,” he wrote to clients.

Chewy shares are trading significantly higher on Thursday after the pet retailer reported better-than-feared results. While analysts were looking for Chewy to report a loss, the company surprised investors with a profitable quarter and shared relatively positive comments about the state of the U.S. consumer.

Foxconn predicts more stable supply chain in the second half of... 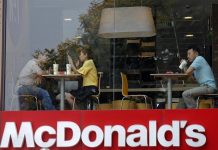