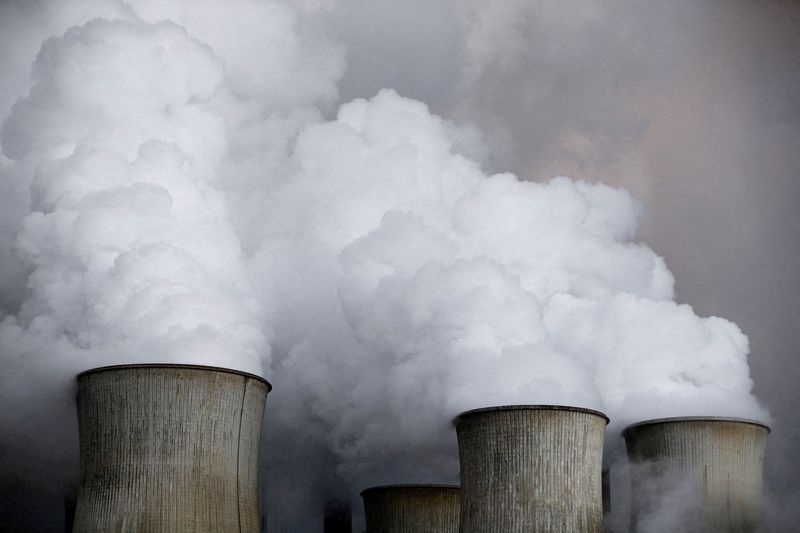 © Reuters. FILE PHOTO: Steam rises from the cooling towers of the coal power plant of RWE, one of Europe’s biggest electricity and gas companies in Niederaussem, Germany, March 3, 2016. REUTERS/Wolfgang Rattay

By Patricia Weiss and Christoph Steitz

FRANKFURT (Reuters) – The German companies that drive Europe’s biggest economy are contemplating painful cuts to their output and resorting to polluting forms of energy previously considered unthinkable as they adjust to the prospect of running out of Russian gas.

Chemical giant BASF is working out which factories could cut output first and rival Lanxess may delay shutting some coal-fired power plants.

As Gazprom (MCX:) cut flows via the Nord Stream 1 pipeline from Russia to Germany by 60% last week, supplier to Proctor & Gamble Kelheim Fibre weighed a decision to spend millions on retrofitting its gas power plant to run on oil.

The 86-year old Bavarian-based supplier of viscose fibres used in hygiene products and filtration has asked the state to help fund the retrofit that would cost at least 2 million euros ($2.10 million).

“The economic situation has continued to worsen and our available reserves are rapidly depleting,” executive Wolfgang Ott said.

“Oil has only one advantage: supply is secure,” he added, saying a plant retrofit would take 6-8 months.

Ott added the group was also in talks about credit lines from state-lender KfW, which has drawn up a support scheme for companies hit by a surge in gas prices.

Aurubis, Europe’s top smelter, said it is also looking for substitutes, but that adapting power plants is expensive and time-consuming.

The companies are among the country’s energy-intense firms that pay 17 billion euros for energy each year.

Until Russia’s invasion of Ukraine began on Feb. 24, they were focused on reducing carbon emissions in line with Germany’s efforts to meet EU climate goals.

Now the overwhelming priority is survival, even if that means a slow-down in efforts to tackle global warming.

Germany’s Economy Minister Robert Habeck, a member of the Greens, said a higher reliance on coal as an energy source would cause Germany’s carbon footprint to grow.

“This cannot in any way please anybody who walks through today’s world with open eyes,” he said.

Burning oil for power, like coal, is highly polluting and was largely phased out of Europe a decade ago.

Historically, both oil and gas cost more and coal was the cheapest way to run a power plant. Now, all energy is expensive and markets are volatile making calculations extremely difficult. European power and gas prices have hit records in response to the concerns over Russia’s invasion of Ukraine.

HOW BAD WILL IT GET?

So far, Germany has activated the first early warning stage of a three-stage plan to cope with a gas supply crisis.

The country’s energy regulator on Tuesday outlined plans to cut industrial gas usage through a tender system that would encourage manufacturers to consume less.

“Hundreds of thousands of companies are working on this (saving energy),” Siegfried Russwurm, the president of Germany’s industry association BDI, said.

BASF, the world’s largest chemicals company by sales, is working on emergency plans for its Ludwigshafen site, Germany’s single-biggest industrial power consumer that accounts for more than 1% of the country’s total demand.

Provided supply does not fall below 50% of the site’s maximum demand, BASF could continue to operate Ludwigshafen, which spans around 200 production sites and needs 6 terawatt hours of electricity each year, but at reduced capacity.

The exact reduction would depend on the availability of gas, as well as oil as a substitute, BASF told Reuters, but said if supply were to drop significantly below 50% over a sustained period, it would have to shut production.

BASF said prioritising which plants would be switched off first would follow discussions with customers and politicians and that some of its products were essential for food production, the pharmaceutical industry and carmakers.

“If push comes to shove, we have to discuss with the Federal Network Agency which plants we should shut down,” the company said, declining to comment further on its Ludwigshafen emergency plan.

At smaller specialty chemicals maker Lanxess, which was spun off from Bayer (OTC:) in 2005, management is looking at ways to prevent shutdowns.

One option is a possible delay of a planned phase-out of coal-fired power plants it still operates at its German sites in Leverkusen and Krefeld.

This, it said, would hurt its carbon footprint.

“But if we price ourselves out of the market product-wise then we will have to close the plants and then hundreds of jobs are at risk.”

Canada’s move to bulk up antitrust muscle may miss root of...

Whole Foods is sued over ‘No Antibiotics, Ever’ beef claim By...

Exclusive-Automakers to double spending on EVs, batteries to $1.2 trillion by...