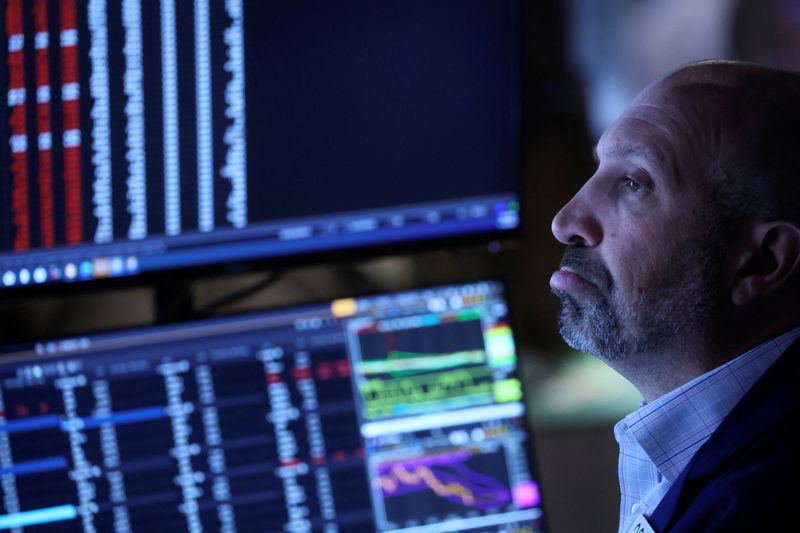 NEW YORK (Reuters) -With U.S stocks on track to mark their worst first half of the year in more than 50 years, investors are studying a range of metrics to determine whether the coming months could bring relief, or more of the same.

By any stretch, the first half of 2022 has been a challenging one for investors. The is down around 18% year-to-date, on track for its worst first half of any year since 1970, according to S&P Dow Jones Indices, as the Fed tightens monetary policy in its fight against the highest inflation in decades.

Bonds, which investors typically count on to counterbalance stock declines in their portfolios, have fared little better: The U.S. bond market, as measured by the Vanguard Total Bond Market Index fund, is down 10.8% for the year to date, putting it on pace for its worst performance in modern history.

With investor expectations fluctuating between continued high inflation and an economic downturn caused by a hawkish Fed, few believe the market’s volatility will dissipate anytime soon.

“We don’t expect the choppiness and volatility we’ve seen over the first half of the year to subside,” said Timothy Braude, global head of OCIO at Goldman Sachs (NYSE:) Asset Management.

Historical data paints a mixed picture of the trajectory markets may follow in coming months. On one hand, sharp falls in stocks have often been followed by steep rebounds: past years in which the S&P 500 was down at least 15% at the midway point saw the final six months higher every single time, with an average return of nearly 24%, according to data from LPL Financial (NASDAQ:) on market declines since 1932.

The S&P 500 rallied more than 3% on Friday for its biggest one-day percentage rise since May 2020 as signs of slowing economic growth led investors to dial back expectations over how high the Federal Reserve will raise interest rates to rein in inflation. For the week, the index is up 6.4%.

One factor that may sustain that rally in the short term is quarter-end rebalancing, as institutional investors such as pension funds and sovereign wealth funds draw on record cash levels to bring allocations to stocks back in line with their targets.

That phenomenon could lift markets by as much as 7% over the next week, JP Morgan analyst Marko Kolanovic said in a note on Friday.

Meanwhile, several so-called contrarian indicators tracked by analysts at BoFA Global Research, including cash allocations and investor sentiment, are flashing buy signals, analysts at the bank said in a note.

Jack Janasiewicz, lead portfolio strategist and portfolio manager with Natixis Investment Managers Solutions, believes the second half of the year is likely to be better than the first. He is growing more bullish on equities, particularly shares of beaten-down big tech companies with strong balance sheets, such as Google-parent Alphabet (NASDAQ:) Inc.

“There is a lot of bad news priced in on the economy,” he said. “We think the risk is to the upside.”

Investors holding on for an eventual turnaround, however, may be in for a stomach-churning ride.

A study of bear markets over the last 150 years by Solomon Tadesse, head of North American Quant Strategies at Societe Generale (OTC:), showed that stocks tend to bottom once they correct the “excesses” of the previous bullish period. That would entail the S&P 500 falling another 22% to 3,020, according to his research, which measures percentage declines during past crises of similar magnitude.

The market selloff is “an inevitable needed correction of the post-COVID excesses,” he said, describing a stimulus-fueled rally that saw the S&P 500 more than double from its March 2020 lows.

Skepticism on the sustainability of a market rebound extends to individual investors as well. A survey by the American Association of Individual Investors in the week ending June 22 found that 59.3% believe that the U.S. stock market will be bearish over the next six months.

For now, however, he remains cautious on the U.S. stock market.

“From a sector perspective, nothing screams safe,” he said.

Goldman Sach’s Braude, meanwhile, believes that inflation concerns and high commodity prices are likely to make the second half of the year as volatile as the first.

“There’s downside risk in stock and bond markets,” he said. “In an environment like this cash is king.”

S&P 500 decline 'will be much worse than what most investors...