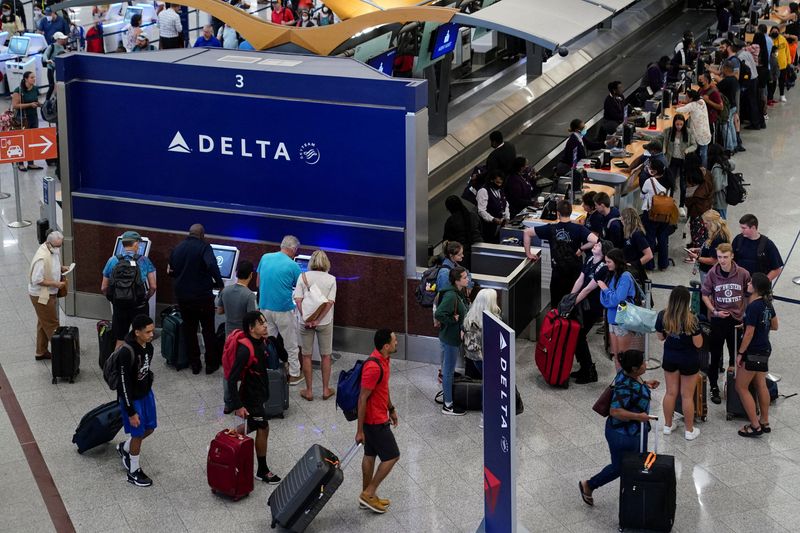 While the lifting of COVID-19 curbs and bottled-up travel demand are translating into the strongest summer since the pandemic for American carriers, frequent mass flight cancellations are creating chaos for their customers.

U.S. airlines have canceled more than 21,000 flights, or about 2.7% of the scheduled total since the Memorial Day holiday weekend in May, almost double last year’s rate, according to flight-tracking service FlightAware. Flight delays are also higher than in 2021.

Analysts and some industry executives don’t see a meaningful improvement before fall when travel demand tends to slow down.

On Tuesday, Delta Air Lines (NYSE:) warned of another round of disruptions during the July Fourth weekend when passenger traffic is projected to be the highest since before the pandemic. To mitigate the impact, it is allowing customers to rebook their trip for free.

The Atlanta-based carrier has canceled about 5% of its scheduled flights in the past two weeks due to staffing, weather and air traffic control (ATC) issues.

The industry’s struggle to ensure operational reliability despite repeated assurances shows the issues, which hobbled air travel last summer, have yet to be fixed.

Carriers are still grappling with staffing shortages after letting go thousands of pilots at the height of the coronavirus pandemic in 2020.

Now, they have been aggressively hiring, with both Delta and United Airlines, for example, hiring 200 pilots a month. Still, some industry experts expect a pilot shortage for years because of limited training capacity.

“They have brought back people… but getting those people to be productive in the operation is a very difficult task,” said aviation analyst Robert Mann. “You can’t just bring somebody in off the street and put them to work. You have to train them.”

Staffing woes have made it tougher for the industry to ramp up its capacity. U.S. airlines have slashed 15% of their summer schedules, according to Airlines for America, a trade group.

To be sure, this is not just a U.S. phenomenon. Airlines across the globe are battling a labor crisis, which is threatening to restrict post-pandemic recovery.

“Airlines are flying planes that they can staff, not necessarily the most profitable or most popular routes,” said Peter McNally, Global Sector Lead for Industrials Materials and Energy at research firm Third Bridge.

Meanwhile, air travel demand is surging despite growing risk of a U.S. economic recession. Passenger traffic in the United States has been averaging about 89% of the pre-pandemic levels since the Memorial Day holiday, according to Transportation Security Administration (TSA) data.

Airlines expect a further increase in the traffic this holiday weekend. United Airlines estimates its passenger volumes to be at 94% of the 2019 level. Budget carrier Frontier expects to have the highest traffic in its history.

Robust demand and limited capacity are driving up both fares and airline revenue. But with most planes operating near full capacity, carriers have less margin to address flight disruptions.

Industry experts say the high summer travel season tends to be stressful for airline operations. But staff cuts at the height of the pandemic have made the problem “more acute”, said aviation analyst Robert Mann.

American Airlines (NASDAQ:) said it has added 12,000 new employees in preparation for the summer travel rush. It is also operating fewer flights than last summer.

Yet, its cancellation rate is higher than last summer. The airline blames air traffic control and weather for its troubles.

“American’s largest and busiest hubs have been affected, which has a ripple effect throughout our operation,” a spokesperson for the airline said.

Biffle said there has been an up to ten-fold increase in the program compared to 2019.

In a letter to U.S. Transportation Secretary Pete Buttigieg last week, Airlines for America said ATC’s staffing challenges are disrupting flights even in good weather. It asked the FAA to ensure adequate staffing and to reduce airspace closures.

The FAA said it has added alternate routes, placed more controllers in high demand areas, and increased data sharing. In order to avoid airspace closures, it said no space launches have been scheduled during the July Fourth holiday.

The agency, however, shot back at airlines for reducing headcount during the height of the pandemic.

“People expect when they buy an airline ticket that they’ll get where they need to go safely, efficiently, reliably and affordably,” the FAA said in a statement.

“After receiving $54 billion in pandemic relief to help save the airlines from mass layoffs and bankruptcy, the American people deserve to have their expectations met.”

The 3 Main Risks For Meta Platforms

Lindsay Lohan’s ‘Falling for Christmas’ isn’t what you hoped it’d be...