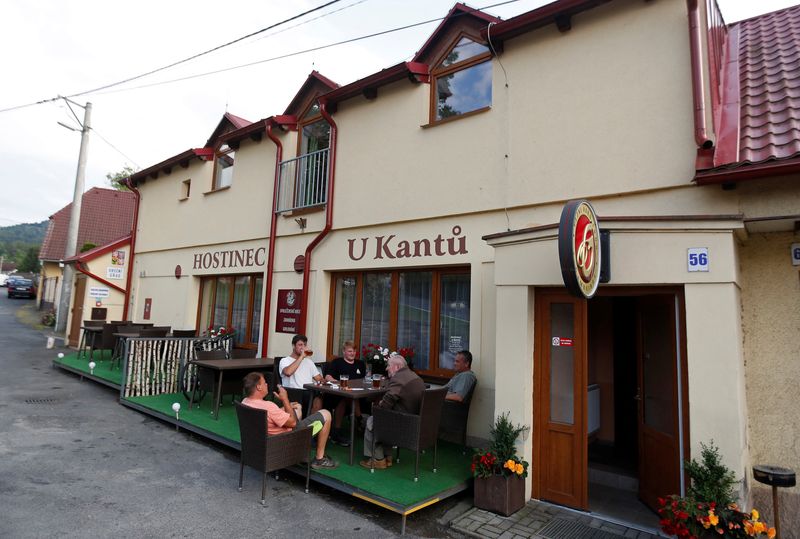 © Reuters. Customers drink beer in the U Kantu pub in the village of Myslovice near the town of Klatovy, Czech Republic, June 28, 2022. REUTERS/David W Cerny

By Jason Hovet and Michael Kahn

SEC, Czech Republic (Reuters) – Czechs have long gathered at village pubs to catch up with friends or celebrate special occasions in a nation famed for its beer culture, but soaring costs and belt-tightening by patrons have now left many watering holes fighting for survival.

Like other pubs across the country, U Kryslu in the village of Sec, population 318, is suffering from a plunge in income as customers cut back on leisure spending – the latest blow to establishments struggling to rebound from pandemic lockdowns.

“In many villages and maybe even in ours the pub will cease to exist,” said Sec Mayor Helena Chytra, who is seeking a new operator for U Kryslu, where on a recent visit only one customer was sipping a beer while the bartender checked his phone.

“Five or 10 years ago at weekends the pub was full. There was no place to sit on a Friday or Saturday night,” she said.

Despite knocking back a world-beating 129 litres of beer per capita annually, Czechs have increasingly turned to drinking at home – a trend that has lingered after the pandemic receded and an earlier smoking ban that damaged pub business.

According to Asahi’s Plzensky Prazdroj – brewer of the famed Pilsner Urquell, around 12% of pubs in Czech towns with under 5,000 people have closed down in the past three years – almost double the rate of bigger cities. Fast-rising costs may prove the death knell for many more, market analysts say.

“The economics of one pub in one village does not often make sense,” said Lubos Kastner, a restaurant owner and member of the Czech Gastronomic Institute. He added that rural establishments would take a bigger hit as the economy worsens.

The traditional Czech pub – especially in villages – has for many generations offered a central place for people to commune outside the home.

Now, many small pub owners are loath to pass on price increases for fear of losing a dwindling number of customers – even as Czech inflation hit a nearly 30-year high of 16% in May amid a surge in electricity bills and other costs.

“In the autumn…the chokehold (for many small pubs) will begin,” said Hanus Vala, owner of the Na Palube Steakhouse in Milevsko in the Bohemia region of the central European country.

For relief, some owners have turned to Plzensky Prazdroj and its “Village” program offering consulting and financial aid for struggling local owners, who worry about renewed coronavirus lockdowns and a deteriorating economy after the summer.

Eva Vejvancicka, owner of U Kantu pub in Myslovice, said she bought it in 2019 to prevent its closure and has since received funding from Plzensky Prazdroj to upgrade its terrace, saving the sole venue for events in the hamlet of 131 people.

“The pub is important for people to meet. There isn’t even a shop here. A pub has always been here,” she told Reuters this week as a group of friends sat outside cradling beers.

Plzensky Prazdroj began its program with 80 pubs in 2017 and now helps nearly 900 – about 10% of Czech village pubs. The aid includes direct financial grants as well as consulting on things like improving the menu and appearance of pubs.

The program targets businesses in villages of less than 5,000 people where often pubs are one of the few places locals can socialise, Pilsner spokeswoman Petra Kubova said.

“Every village has a three-legged stool of church, soccer field and pub that helps support the community. Without one, a village is missing a leg of the stool.”