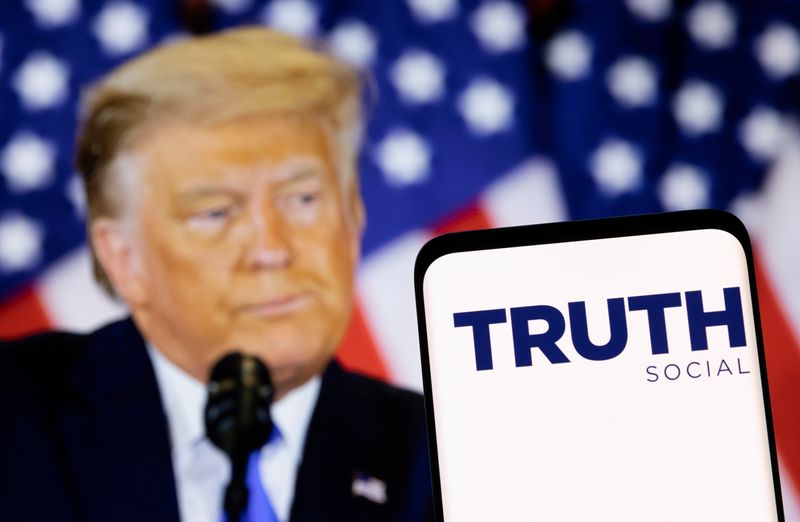 © Reuters. FILE PHOTO: The Truth social network logo is seen on a smartphone in front of a display of former U.S. President Donald Trump in this picture illustration taken February 21, 2022. REUTERS/Dado Ruvic/Illustration

(Reuters) – Employees at a Miami investment firm had learned of a pending merger deal between former President Donald Trump’s social media company and a blank-check entity, long before it was announced, the New York Times reported on Monday, citing three people familiar with the discussions.

Officials of the firm, Rocket One Capital, at the time talked about ways to profit off the soon-to-be-announced transaction with Trump Media & Technology Group by investing in the SPAC, Digital World Acquisition Corp, the NYT reported, citing two of the people.

Federal prosecutors and regulators are now investigating the merger, including the frenzied trading in the SPAC’s warrants, the report said, citing people familiar with the investigation and public disclosures.

Trump Media & Technology Group, the creator of social media platform Truth Social, agreed to merge with Digital World on Oct. 20 and the deal was expected to close by the second half of this year.

Digital World shares soared as much as 350%, a day after the deal was made public.

Trump Media and Rocket One Capital did not immediately respond to Reuters’ requests for comment.

A trail of oil: Keystone pipeline's history of oil spills