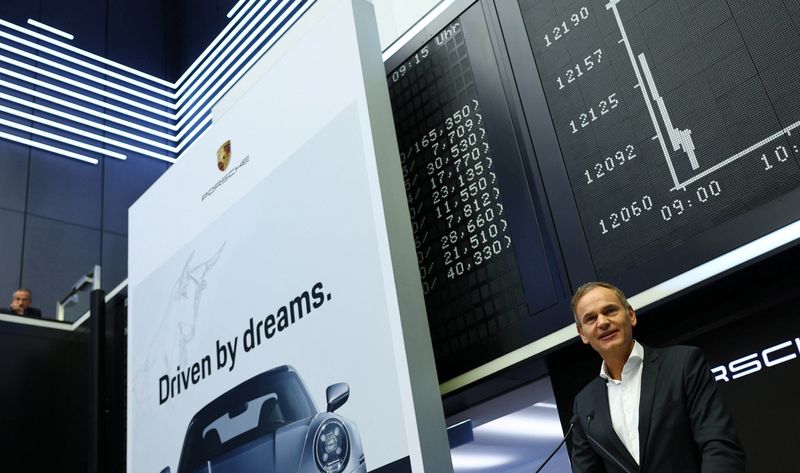 Here are key facts about the structure of the listing:

– Porsche’s share capital was split in two, with 455.5 million ordinary shares and the same number of preferred shares, totalling 911 million shares overall, a play on the company’s most famous model.

– Ordinary shares carry voting rights, which matter when it comes to the question of who controls the company.

– Preferred shares don’t carry voting rights, but their holders will receive an additional dividend of 0.01 euros apiece on top of every dividend the company pays out on ordinary shares.

WHAT WAS SOLD BY VOLKSWAGEN?

– As part of the deal, Volkswagen (ETR:) sold 25% plus one ordinary share in Porsche AG to Porsche SE, the holding firm controlled by the Piech and Porsche families, effectively giving them a blocking minority in the namesake brand.

– Volkswagen also sold 25% of preferred shares on the market. Qatar, Volkswagen’s third-largest shareholder, committed to buy 4.99%, leaving another 20.01%, or 10% of Porsche’s total capital, to other investors.

– The sovereign wealth funds of Norway and Abu Dhabi and mutual fund company T. Rowe Price also committed to buying 1.8 billion euros worth of preferred shares between them.

– Porsche SE, already Volkswagen’s largest shareholder and holder of the majority of voting rights in Europe’s top carmaker, bought its stake at a 7.5% premium to the 82.50 placement price of the preferred shares.

HOW MUCH MONEY DID VOLKSWAGEN GET?

– Volkswagen’s proceeds from the sale of ordinary and preferred shares are 19.5 billion euros ($18.8 billion).

– Volkswagen will call an extraordinary shareholder meeting in December where it will propose to pay 49% of total proceeds, or 9.6 billion euros, to its shareholders in early 2023 as a special dividend.

– Volkswagen AG (OTC:) and Porsche SE jointly own all of Porsche AG’s ordinary shares in a 75% minus one share-25% plus one share split.

– Overall, 75% minus one ordinary share of Porsche AG’s total share capital is owned by Volkswagen AG after the IPO.

Toyota to suspend morning shift in one Japanese factory due to...